Holding On and Looking Out by David C Johnson 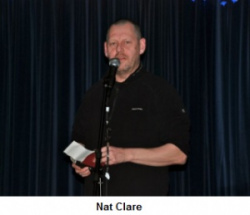 This latest collection of poems from Bristol poet and spoken word performer David C Johnson made me slightly apprehensive at first as it is recommended by the author that they are to be ‘read in bed and shared aloud’. Problem.  In my case reading the poems aloud alone in bed might be construed as either very sad or slightly mad or both. But that’s just me ... oh and the neighbours.  However, I needn’t have worried. David’s lyrical collection can be read in the bath, alone and silently.  Effective although admittedly not as much fun!

The first poem , the oddly-titled ‘Ear Trumpets’ is as much a love-hate homage to David’s home city of Bristol as it is to the protagonist Pero the slave. Bristol, like Liverpool, has had a past of which it’s no longer proud  but combined with musings on the iniquities of the slave trade, David vividly conjures up the sights and sounds of modern Bristol where poets are barred from bars and mariner’s  tall tales of ‘death and mermaids’ give way to the Big Issue seller’s ‘needy pleading’. Atmospheric and evocative.

Bristol features quite strongly in this collection and the next couple of poems ‘Bristol 2009’ and the quirkily clever ‘Why Bristol is Best’ (only as compared to Bath, that is!) reveal a genuine sense of place and a nostalgic fondness for a city that once made ‘busses, cranes and planes’ - as well as a commodity now much valued by several of my poet friends - ‘ reinforced corsets’!

I liked the tale of the Elgin Fox, a creature to be wondered at by liberal urbanites but an animal which loses much of its rustic charm when it jumps through your patio and pisses on your antique table! (Which reminds me of a dinner party Paul Blackburn and I once gatecrashed but that’s another tale with another time for the telling.)

I’m not a rail enthusiast- although some of my favourite nerds are- but I can appreciate the poetic beauty of a journey on some idyllic Adelstrop branch line before Beeching cut the life out of the network. David takes us on such a journey along the Severn Beach Line in his poem of the same name when Bristol, it seems, had its own Blackpool! Personally, I feel sorry for the donkeys.

More nostalgia - but without falling into the trap of sentimentality - ‘The Lighthouse’ tells us of a pre-asbo era when parent-free prepubescent schoolboys sneaked off to the seaside to fumble furtively with their heart’s desire –  which in David’s case was ... a box of matches! (ok - maybe that was just David!)

Now, this review is of limited space and consequently, I won’t do a complete poem by poem analysis;  anyway that will spoil the fun for when you read the collection yourselves and put a few well-deserved Euros in the poet’s pocket. {Believe me only about 3 poets in the world have ever managed  to earn any money from poetry and 2 of them are dead.}

All in all, ‘Holding on and Looking Out’ is a collection of picaresque and nostalgic snapshots that derive their charm from the poet’s warm heart and observant eye. Reading the collection is a reflective and calming experience.  I wouldn’t say that this collection made me see the world differently but it did make me look at it a little bit more closely.

"Holding on and looking out " (ISBN 9780654811761 Paralalia) was launched in April 2010 and can be ordered directly from David by contacting him at this email address:
davidcjohnson@davidcjohnson.demon.co.uk.