Hi, I am a satirical performance poet based in Hertfordshire. Most of my poems centre around politics, reality TV, relationships, and fish fingers! I am a member of RRRants, a poetry collective based in the home counties. My website is www.georgestanworth.co.uk

AN ASBO FOR SOME IS NEVER ENOUGH Clarkson loud music chunders around. Alsatians’ barking injures the sound. Empties of Bailey's smash on the ground. An ASBO for some is never enough! Random expletives yelled for effect; stealing from family to pay off their debt. Jeremy Kyle is soon to be met. An ASBO for some is never enough! You're sent off to Spain to help you calm down, and extra tax credits are given by Brown. You use them wisely defacing the town. Two ASBO's for some are never enough! PARTY POLITICAL GAMES David Cameron and Nick Clegg played Mario Kart. The PM was Bowser. His No.2 – Princess Peach. John Major sulked. He wanted to play Daley Thompson’s Decathlon. Cameron and Clegg just laughed and mocked him for being way behind the times. Barack Obama told them to simmer down as it was time for bed. Clegg sucked his thumb and Cameron took his anger out on the sick and the needy. FRANK! STOP IT! I’m sadder than a roundabout that lives in Milton Keynes. More miserable than Morrissey when having happy dreams. I’m glummer than a pomegranate dropped into the loo. As melancholic as K9 without his Doctor Who. I’m sadder than a carnival taking place in fog. I’m gloomier than owls that wish they were a frog. I’m glummer than a raindrop falling on a hearse. As melancholic as a witch who’s lost the will to curse. I’m sadder than a ladder missing all its rungs. And glummer than a runner who’s got a punctured lung. I’m gloomier than greyness mixed with cloudy grey. I wish I was more camper And born a little gay! I’M NOT VAIN – SO WHY DO I THINK THIS POEM’S ABOUT ME ! Britain’s haemorrhaging its cash So how will Labour stop the crash? I hope they don’t tax all big noses, large ears, acne, halitosis. Generate the cash elsewhere. Penalise those with no hair. Gordon don’t tax all big noses large ears, acne, halitosis. It’s not as if I’d have to care. I’ve got perfection everywhere! But such a tax would be unfair. I’d march upon Trafalgar Square:- Shouting ‘Breath of onion rings, flabby legs and bingo wings should be taxed before big noses, large ears, acne, halitosis! I hope they don’t tax all big noses, flatulence, and tiny hoses! 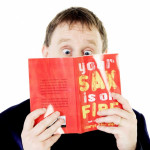 Your Sax Is On Fire Quirky.jpg
( 0 comments )

Hi George - your comment on "Dog Dancing" is much
appreciated from a poet with your own range of
imagery and humour.

thanx for reading and commenting on my varied poems George. regards Nick:)

Ta G A man of taste and forthrightness. :o) Tommy

Hello George,
Glad you enjoyed "Your First Hut is the Cheapest" and "Ikea". As you may have noticed I don't write much that is "worthy" but I do have several rather irreverent song parodies posted on the site.

First - thanks for your kind comment on my last post.
"We laugh...we jest...
To forestall the final rest!"
Second: love your line "I'm glummer than a raindrop falling on a hearse" (above) in a very funny poem. Priceless!

good poems George and I love the pic.
is there any airfreshnerbody there? Brill! pic

I love your rhyme and your "ASBO" poem...

Hello George,
I've just been reading through your poetry and love your writing style. It is a little surreal at times but that is what makes it so appealing. I particularly like Frank, stop it. How did you come up with that title?!
Carrie

Hi there George,
And welcome to WOL. Love the gentle, self-deprecating humour in your poems - and don't we just need humour in these bleak times? I have found this to be friendly, helpful place to hang out. Hope you enjoy your time here. Maybe the best way to get something out of this community is to offer a few crits on the work of others and check out the discussion forums. Have fun!
Regards,
A.E.