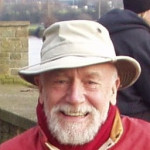 Just wanted to say... "Thanks for being you, for being here, and bringing cheer"

Your comments make me smile
I love your work and love your style.

The hat is alright.

It's a bit stormy at the mo so hold it, hold it tight!

Alan reading NEWSREEL is like watching an old film.

It's like remembering the things in the past you wish you could leave behind but the images keep replaying themselves over and over and over.

We should NEVER forget!