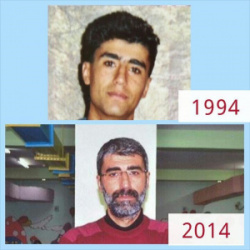 The plight of a Kurdish poet who has been in prison in Turkey for 26 years has been highlighted in a letter to the Guardian. The letter, signed by poets George Szirtes, Anne Stevenson,  Ruth Padel, Gillian Clarke, Choman Hardi, Pascale Petit, Ifor ap Glyn, Gwyneth Lewis,  and Camilla Reeve, publisher and poet, among others, says:

“We write to draw attention to the plight of the Kurdish writer İlhan Sami Çomak. Çomak was originally arrested in 1994 as a 22-year-old geography student at the University of Istanbul. He was charged with starting a forest fire and of being associated with the banned Kurdistan Workers’ party, charges he denied and to which he confessed only under torture.

“Despite evidence of his innocence, and despite a series of failed or constantly postponed appeals, he is still in prison on the basis of that same confession. While in prison, his sentence was extended after the events of 2016, the failed coup and the ensuing repression. There seems to be little prospect of his release in the near future.

“Despite his 26 years of prison, Çomak has produced several volumes of highly regarded poetry, the last of them winning the prestigious Sennur Sezer prize in 2019. On 3 February in the Poetry Cafe at the Poetry Society, a packed audience attended an event organised by Exiled Writers Ink and Norway PEN, dedicated to Çomak’s poetry and fate. It was a moving evening.

“There are many other writers in Turkey who have fallen foul of the government. And 70,000 students currently in prison, but a writer such as Çomak, being the longest-serving one-time student, deserves our special attention. We call on the prime minister and the foreign secretary to make representations to the Turkish government to free him as soon as possible.”

Writing in the Guardian, George Szirtes said: "How did he come to be there? One factor, most likely the main factor, is that he is Kurdish. That is not a crime in itself, but belonging to, or even associating with a Kurdish political organisation is. There is also the specific matter of starting a forest fire, but no serious evidence has ever been brought to prove that. The only 'proof' was his confession under torture and this has been highlighted in any appeals to free him.

"It is not unusual in Turkey for writers to be imprisoned. There have been, and still are, too many to mention here but none has been incarcerated for as long as Çomak. Some have published from inside, some with great success. One of Turkey’s greatest poets, Nâzım Hikmet, who died in 1963, spent much of his life in prison or exile.

"Putting aside writers, there remain the students. Following the Gezi Park environmental protests of 2013 there were over 70,000 students in Turkish jails and total numbers will have swollen since the attempted military coup of 2016. The precise number is unknown.

"After the abortive 2016 coup some 53 newspapers were shut down. Many more media organisations were outlawed. There is regular pre-trial detention for those writing or sharing social media messages thought to be even faintly or indirectly subversive. Above all, perhaps, it is the the Kurdish population and Kurdish writers who have been most affected. The Kurdish Insitute was closed after 2016 and the very existence of Kurdish literature is under threat. Çomak’s poems are increasingly appearing in English translation though not yet in book form.

"Should we think of Çomak as a prisoner who happens to write books of poetry? The poems need no such framing. They are not political in the sense that they advocate any specific point of view. His concerns have been elemental and full of memories of freedom, love and companionship. As he writes in “Life Does Not Lie”, translated by Caroline Stockford:

I am between the moon and the tide.
Between the whisper and the scream.
As a child I still had the script of a child, I was hostage to my mother’s pomegranate smile.
When I looked from the window to the full light of the garden
Watching the philosophy of hands plucking the fruit tree,
In those times when we still heard the sounds of frogs,
When women passed through my life, the lake was blue
And I knew the value of blue. I understand pain too, on the steps of life.

"A fellow poet, Haydar Ergülen, suggests the poems could have been written inside or outside prison walls. And of course we must remember it wasn’t for his poetry that Çomak was imprisoned.

"His contacts with the outside world are very limited. He has been shifted from prison to prison to prevent his parents having access to him, but they have followed him each time. It is worth noting that Britain has strong economic ties with Turkey and could demand the immediate release of Çomak as a precondition to any agreement. Appeals against his sentence have been constantly delayed but his poetry, rightly, reaches ever more readers."

◄ Write Out Loud at Bolton Socialist Club is cancelled

News » 'Do Not Ask': a poem to mark Holocaust Memorial Day

The genocidal attacks on the Kurds, the Ezedis and the Christians of Anatolia, as well as the imprisonment and murder of opponents, should mean that Erdogan and his band of Islamist terrorists are thrown out of NATO but, instead, the weak-kneed west appeases him and so İlhan Sami Çomak remains incarcerated.

The only positive aspect seems to be the publication of what he writes from his incarceration. The word "uncivilised" takes on its
rightful meaning when considering the legal cat and mouse process
being enacted in a country that seeks to portray itself as worthy of
respect and acceptance as "civilised".