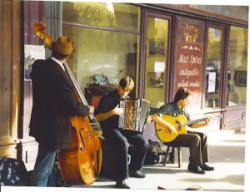 the liberators told the restless Resistance

in messages dropped from the sky.

Hitler’s demand to fire the city.

‘Come quickly,’ he urged the Allies.

hundreds died before the ceasefire.

Sixty years on, our Friday Eurostar

from Waterloo packed with rugby fans.

The hotel room near

much smaller than it seemed on the web.

No matter. A late, North African

meal; a boy, bread under his arm,

skipping down the street;

kids and their dads sailing boats

in the Luxembourg gardens.

three young men in the square

of music that made my father cry.

I wept, too. The spirit of Paris,

and much more besides.

Islands of the Loire ►

Cheers, Ray. And well done to the Villa in reaching the League Cup final. You never know ...

Nice poem, Greg. Prompted me to google Von Choltitz, which was interesting.