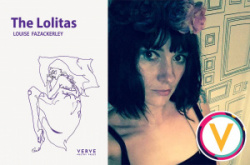 A collection by leading spoken word poet Louise Fazackerley that includes the experience of working with groomed girls in the care system, and is in part a response to Nabokov's novel Lolita and the #metoo movement, was launched on Friday 13 December in Wigan.

The Lolitas includes poems about daughters, single parenting, love and abuse, and others that explore the story of Shamina Begum, the Jeffrey Epstein/ Prince Andrew scandal and how Tokyo treats teenage girls.

The launch reading was at The Fire Within, at The Galleries, Standishgate, Wigan. The event included an opportunity to view the Love Is A Rebellious Bird exhibition which includes a response to The Lolitas.

Wigan-born Louise Fazackerley is a recipient of BBC 3 The Verb's New Voices award.  She is signed to spoken word label Nymphs & Thugs and tours the country extensively performing her work.