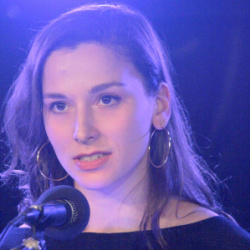 A young American currently studying at Oxford University, Michaela Coplen, pictured, has won the £2,000 Troubadour international prize with her poem ‘Re-branding’. Kathryn Maris, one of the two competition judges, said the winning poem was “like a complicated building - let’s say a Gothic cathedral - with buttressing, barrel vaulting and decorative features like stained glass and sculptural friezes. By some miracle of design, the structure doesn’t collapse, and nor do its components. Coplen’s architectural genius is her syntax, alongside a strong and certain voice. Despite its hesitations, qualifications, side stories and interruptions, this narrative about youthful antics with friends in rural United States is so structurally sound, so sure of itself, it could have no destination but a first-place spot. I expect this is not the last we’ll hear from this outstanding poet.”

Her fellow judge, Pat Boran, said: “The winning poem, Re-branding, does something poetry does particularly well. In indented lines that seem to mimic the movement of smoke (the heart of the scene is describes), it attempts to put a past event back together, all the while following a rhythmic narrative turn in which the focus is now on the external, observable details and now on the speaker’s own thoughts and feelings and observations of her own part in the scene. The poem turns the act of memory into an act of creation and recognises in the transience of the events it describes a moment of formative realisation, ‘a searing thing’ that will forever leave its mark.”

You can read the winning poem and a number of others, plus the full judges' comments here

The prizes were announced at the Troubadour in west London on Monday night, and Michael Coplen received her £2,000 cheque from Anne-Marie Fyfe, organiser of the competition and of Coffee-House Poetry, which runs regular poetry nights in the basement of the Troubadour. The “end-of-season” evening included a “know your colour chart” quiz including music from keyboard maestro Cahal Dallat, and readings from dozens of poets on an “over the rainbow” theme, as part of a poetry-party celebration.