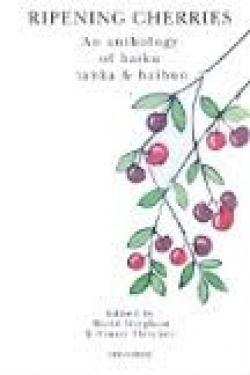 In recent times, the Japanese art of haiku and its related forms, the tanka and the haibun, have become increasingly popular in poetry circles throughout the UK. Offa’s Press recently played an active part in promoting these verse forms by holding a series of writers’ workshops across the West Midlands and the Black Country during the latter half of 2018 and the first part of 2019. Ripening Cherries showcases some of the poetry that came out of these workshops and also includes poems that were sent in after a call for submissions. Some of the writers in this anthology have been awarded international prizes for their work while others who are represented are experimenting with these art forms for the first time.

An introduction by the editors gives a useful background to the anthology and the different verse forms that are contained within it. They point out that "it may be a surprise to readers who have been taught that a haiku is a short poem in three lines with a syllable count of five syllables, seven syllables, five syllables to find this is not always the case. In fact, writers who specialise in writing haiku are more likely not to use this form than those who are new to the genre.

"Also, to understand haiku it is important to know they most often contain two images separated by a kireji. The kireji is a 'cut' which usually occurs at the end of the first or second line. The juxtaposition of the two images creates a moment of revelation, the 'haiku moment', when the reader connects the two often disparate images and realises what the haiku is about."

Forty-one writers are included in the collection of over 70 haiku, just over 20 tanka and 12 haibun. There are strong contributions from David Bingham, Marion Cockin, Bo Crowder, Simon Fletcher, Bethany Rivers, Jane Seabourne, John Sewell, Michael Treacey and Ros Woolner. Some examples are given below of each of these forms to give readers a taste of the variety of styles, subject matter and inventiveness contained in the anthology.

Two haiku, the first by Roger Noons and the second by Jane Seabourne, offer a different take on the theme of contrast. In common with all the haiku and tanka, they bear no title; only the haibuns have titles. In the first, the smallness of the lone warbler and its voice are contrasted with the volume of sound that would normally come from a brass band in the bandstand of West Park in Wolverhampton. Extending the musical analogy, the whole haiku reminds me of a musician playing a concertina as he expands and contracts the bellows to supply air to the reeds and to control the dynamics. In the second, the child that was once our former self lives on in a ritual re-enactment of that dash to the one seat on the number one bus that was coveted the most for the view. We all still want, so much, to be number one.

driver’s side. Number One bus route –

The following tanka by David Bingham is a fine example of two disparate images producing a third image that is a symbol of forgiveness giving us a momentary insight into a personal relationship:

to be with you.

John Sewell’s ‘Plate Tectonics,’ a haibun for LLR, is a single piece of prose followed by a haiku which brings together the large-scale motion of the Earth’s outer shell with the core of a personal relationship that is sadly on the wane:

You’re moving away from me. Day after day we’re further apart. Such sly, inexorable increments.

Wave to me Linda.

Wave to me, please.

Before it’s too late.

In the words of Jood Gough, the contributions in this anthology are like “paintings that speak of small things / rather edgily.” Recommended.