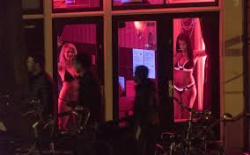 I've learnt something new from a poem

That I didn't know existed before

Which I thought was about someone's door

The poet she talked about Knock House

I thought what the heck's this about?

For not having lived in that area

A knock house? It left me in doubt

So went to a web dictionary

To check what a knock house was for

I reeled back in shock to discover

A knock house was a brothel with whores

So went to look closer, to immerse

The poem seemed involved with religion

Whatever did brothels have to do with this verse?

It seems Knock's a shrine in Knock village

And nothing to do with a door

I needed to sort my confusion

Which was making me miffed, feel quite dense

And not living where the poem was created

◄ Down the Rabbit Hole

The more usual term is probably "knocking shop". As for brothels
and sin, let's not forget that a certain Mary Magdalen was not
perfect according to religious teachings but JC had time for her...
sending us back to that admonishment "Let him (her) who is without sin cast the first stone."

The poem 'Knock Knock' appeared on WOL ages ago and when I Iooked closer discovered it referred to Knock House in Knock village. I couldn't find the poem or writer. May have left?....

Seriously you get such things before us which we really never knew....not a topic where i mus comment...cos it's a boyzone...still...thnx for telling...for v mus know.😯