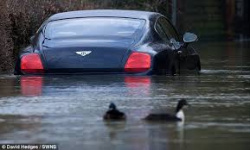 I think I may have stumbled across a solution to the thorny issue of Brexit all by myself.  It came to me after a recent rash of political leaders broke out around Donny.

Apparently, when she was visiting Stainforth Jo Swinson told victims they should apply for EU Emergency Funding.

And you can see the problem.  It would be hypocrisy on a gargantuan scale for the Brexiteers of Stainforth, Bentley and Fishlake to apply for EU monies.

Economic studies have shown that “Leave” areas of the UK would be hardest hit by the Smaug-like sweep of Brexit’s tail.

But, of course, the devastation in these areas would also be visited on those who voted Remain.

So here is my solution; and simple it is too.

Not unlike your own individual tax code applicable to your NI Number, each and every one of us would be identified as a Leaver or Remainer and have the benefits and liabilities associated with that applied to us.

Remainers would be taxed differently from Leavers in order to pay for their continued membership of the EU while Leavers would benefit from not having to pay the EU a penny.  Conversely, Leavers would pay higher prices for imported goods such as foodstuffs and only their jobs would be lost when companies’ exports became uncompetitive.  Instead of LIFO (Last In First Out) being a determinant of who is made redundant companies would adopt LOFO (Leavers Out. Fuck Off).

So back to Donny.  Remainers would take advantage of Jo Swinson’s advice and apply to the EU’s Emergency Fund.  In fact, their benefit would be double because it need not be shared with Leavers.

Now I know what you’re thinking; that this would be hugely divisive and create two nations within Great Britain.

Certainly. But no more so than when we leave either with or without a deal and become the two nations of Littler Britain and Scotland.

Leave me be in dreamland, Graham. This is too good to wake up.

John John John! It’s all a bad dream! Wake up!

I love a lateral thinker John. 😃

I suspect I am the only person left standing who is still enjoying it all, Brian. “Vive le Brexit” I say.

At least you can still laugh about it all John.