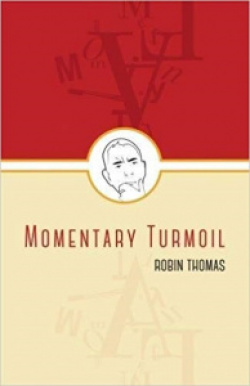 Robin Thomas writes poems of deceptive simplicity and often vivid visual imagery. He is inspired by paintings from the Renaissance, incidents in war and at sea, jazz musicians, railways and family relationships. But this is too simple a description of what his poems do. The Momentary Turmoil in his collection’s title derives from narratives running under and around those themes.

In ekphrastic poems he climbs into the subjects and substance of paintings, and inside the minds of painters, from Lorenzo Lotto and Wright of Derby to Eric Ravilious. He inverts the banal messages of railway notices so that they become sinister interdicts. And then there are the poems that hint at a deeper personal turmoil, in which a mother is dispossessed by old age and dementia, a father recalls with regret a tiny incident when he failed to be generous to his child (“It still returns”) and in which a man suddenly lets loose his aggression on his environment as a woman brings him a cup of tea, says something (what? we wonder) and a cat jumps down from his lap (‘Event’).

The first poem in the collection, ‘Bright Yarn’, is a prose poem of great power with beautiful visual images: “Great Aunt Edith’s bed where she was propped up knitting socks for me and dying for herself” is crossed by the bright wool that is “like the road snaking through the Chilterns” on which the narrator travels to visit her. The dark road home is “a half-seen promontory in a sea of shadows, an argument where there is no giving way”. Half-sketched, dimly sensed, the transitory nature of the humans in the poem is highlighted by the deer on the path that “looked at us, expressionless, as if trying to fix our image”.

I enjoyed ‘A, G, B to E and, Oh dear, F’” which is a playfully surreal take on the problems of the rail traveller, with a slightly sinister twist in the third stanza. Thomas parodies officialdom’s pomposity of tone in his rules for rail passengers travelling in the ‘Quiet Carriage’ and the ‘Loud Carriage’. These include, in the quiet first-class carriage, G,

Do not read the Daily Mail

unless it is disguised with brown paper.

Do not speak at all if you have a northern accent.

In the loud carriages, B to E, it is compulsory “to talk as loudly as you can and hoot with laughter / at jokes which are devoid of humour” and “bellow into mobile phones, / shouting details of your divorce”.  The punishment for being quiet in a loud carriage is to be transferred to Punishment Carriage F where passengers will be compelled among other tasks to

write a villanelle in Latin

and/or compile a report

on the recent downturn

in sales of guttering in Lithuania.

Truly a rail passenger’s hell, in all carriages, and an eerily familiar one!

A visit to an art gallery or museum with Thomas can be a rich, surprising experience, coloured by the narrator’s mood and the painting they aim to see. In ‘Excursion’ we’re led mysteriously underwater,

into a vision of a luxurious ship-board complete with fans, waiters and stifling heat, and only in the last two lines out into the gallery where Cezanne’s landscape picture hangs.

But in the poem titled after Ferdinand Bols’s ‘The Toper (1650-51)’ we stay resolutely in the gallery, morosely wandering through the Wallace Collection, for most of the poem: “These dusty cabinets, / the endless stream / of dead life.” The narrator has come to the gallery looking for help – “It’s hard, so hard” – and at first finds only reminders of death, but “What’s this? A / florid kind of bowl / Wine cooler. Urbino. 1560.’ And at last, “Who’s this big Dutchman?” – the narrator is pulled into Bols’s picture by the Toper, who jovially invites him to get drunk with him.

I believe it’s difficult to write ekphrastic poems that avoid bland description but Robin Thomas achieves that, over and over again, in this collection. A story is inside each picture and Thomas gets in there with it: the family portrait by Lotto in which the poem has Giovanni Della Volta haggling with the painter over the price; the portrait of Francesco Albani in which the paint itself is given an arrogant voice. So much sensual information is inferred about the sea and land in ‘Les Sables d’Olonne’, the short poem about a seascape by Albert Marquez: “Houses a string of parched skulls” beside “the treacly water” and the colours of the boats that

Thomas references the Nazi occupation of Holland in some poems, with understatement that forces the reader to investigate the poems for more clues to their narrative. Miep Gies, who shielded Anne Frank in Amsterdam, receives a tribute to her nurturing; a more oblique prose poem, ‘Max Ament’, mourns the death of a young boy in Auschwitz; another oblique reference to Nazi atrocities seems to underlie ‘Straight from the Oven’. ‘Die Aanslag (Amsterdam 1943)’ is in memory of Harry Mulisch, who became a celebrated Dutch writer after he survived the Nazi occupation, thanks to his father’s co-operation with the occupiers.

This is a wide-ranging collection, in terms of time, geography and emotion. There are poems in memory of Benny Goodman and Fletcher Henderson (‘Swing, Brother, Swing’) and Miles Davis (‘Miles Ahead’). Cornwall, Russia, France and Berkshire appear through the lenses of paintings and documents. Caversham in Berkshire is given a Frank O’Hara treatment.

The poems that I find most moving in this collection are those in which the poet’s mother appears to impinge on his life, bringing feelings of guilt, regret, and helplessness. ‘Froxfield Stop Off’ has the poet alone in the village pub, thinking of Edward Thomas who

was here the year

my mother was born, writing about time,

not knowing how little remained.

The poet has been overseeing the winding up of his mother’s affairs as an independent person: “‘Bit by bit / I am signing her away.”

‘Expedition’ has an epigraph by Captain Scott: “Great God! But this is an awful place!” This poem sums up much of Thomas’s message. Ostensibly referring to the trek across polar ice by Scott, it conveys the sense of struggle that an ageing mind and body, and indeed all of life’s small and great vicissitudes, can inflict upon us:

Several times a day my mother

sets out for the South Pole;

and after assembling a burden of heavy mountaineering gear and wearily making it to the top of the mountain, “with a great sigh / stares into the unfathomable dark.”

This collection rewards each reading with deeper and deeper layers of meaning. The humanity of the poems lies in the “momentary turmoil” that for Robin Thomas characterises life, and which his cast of real and imaginary characters share. History becomes a matter of moments  – of awareness, suffering, injustice but also absurdity and beauty.

◄ 'Get on a website called Write Out Loud': Tony Walsh's advice to would-be poets