'Get on a website called Write Out Loud': Tony Walsh's advice to would-be poets 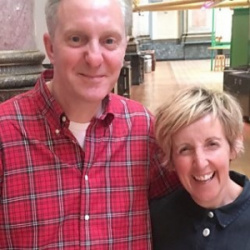 Top performance poet Tony Walsh has given Write Out Loud’s Gig Guide a ringing endorsement in a wide-ranging and inspirational radio discussion with fellow northern performer, actor Julie Hesmondhalgh, pictured, on access to the arts for working-class people.

Tony, whose poem about Manchester, ‘This is the Place’, went viral worldwide after he read it at a city vigil for victims of the Manchester bombing in 2017, said on the Radio 4 programme Only Artists: ”I was 39 before I read a poem in public.

He added: “I was very lucky … the clouds parted for me, and I gave it a really good go.”

Tony was closely involved with Write Out Loud in its early years. His advice to would-be poets who might follow in his footsteps? “Get on a website called Write Out Loud … and you’ll find friendly little poetry nights near you, rooms above pubs, or at the back of libraries.”

He said: “People are looking for connections, for authenticity … and poetry fills this space really well.”

These days you’ll often see Tony Walsh on TV, or hear him on the radio. He is regularly commissioned to produce poems, and works in schools, prisons and with community projects. He is currently touring the country, and you can find his tour dates here.

◄ 'I like remembering my brother when he was young, decades before anything went wrong'

One of the best things I ever did was to join Write Out Loud in Stockport. I was at the very first meeting, and have been a keen participant ever since...
Write Out Loud is absolutely fantastic!

Well that's just what I did and set up a profile!