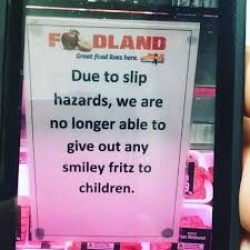 As children we were given fritz slices

Which had smiley faces built in

The supermarkets and butchers all gave them

(No reader, my poem's not fin)

A customer just happened to slip

On some fritz which was dropped on the floor

Though hitting her head she was not injured

You can guess the reaction of store

A ban was placed on giving smiley faces

Inciting rage as it spread round online

We grew up on getting fritz faces

This followed only months after an infamous

Which scandalised our nation, put in jeopardy

A hardware giant with community BBQ outside

And not the other way, (on top of sausage)

◄ Anomoly of the Law