A to m bombs and a to z gems 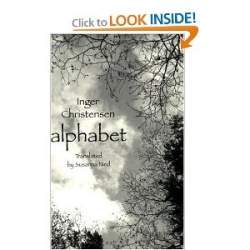 There are many, many more types of poetic expression than the personal lyric.

The lyric has become predominant at the present time because of political and ideological factors: we look to the self as the source and sole repository of values; we value personal experience as the only trustable source of knowledge of the world.

The idea and ideal of community has been tugged from beneath us; likewise the ideal of a sense of futurity, of progress, to be replaced by an all-encompassing political climate where our lives seem wholly regulated by bodies of authority (ie from John Donne’s “No man (one) is an island” to the Thatcherite statement that there is no such thing as society. We may hate it, but we do have to deal with it).

It was not always so blatant. Nor is it naïve of us to still believe in such things as community; it is just the rhythm that has changed, the song is the same: now, more the bedsit singer/songwriter, and not so much the ensemble, as it were. Swings and roundabouts.

The late Inger Christensen (died 2009) has been a great advocate of performance poetry. Her particular forte was the jazz-poetry events she was at the forefront of promoting.

Susanna Nied’s prize-winning translations of the works of Christensen’s systematic poetry have been duly recognised as the best in their field.

Christensen has long had a large and loyal German readership; they put her forward for the Nobel Prize in Literature.

Oulipo was based around the writer Raymond Queneau, and incorporated George Perec (‘Life: A User’s Manual’, and ‘A Void’, a novel that, when written in French used words that do not have the letter ‘e’). Queneau was a mathematician, and so the group tended to use highly complex mathematical structures for their writing.

Seamus Heaney’s ‘Seeing Things’ sequence of four lots of twelve poems, each of twelve lines in length, also points to an Oulipo construction. Why twelve? Is twelve an expression of completion? We have to ask these things, because they have an intended significance.

Matthew Welton also uses many of their structures and techniques.

Most recently we now have poems created upon use of the mathematical concept of pi called Pilish – or "piems" – where the number of letters of successive words is determined by pi.

The Fibonacci mathematical system was ideal for Oulipo purposes.

‘Alphabet’ was published in 1981, and was instant hit.

In ‘Alphabet’ the repeated phrase of paragraph 1:

mirrors the first two numbers of Fibonacci – 1 and 1.

It is also a numerical device of implication; where 1 is a prime number; it is also the main focus of a network of negative and positive numerical sequencies, of decimals and fractions: 1 is never 1, it is the consequence of its positioning, and it is that that is evoked here.

The reiteration of the clause emphases 1’s position in the matrix of math. As in the Fibonacci sequence we do not begin with 1 but with 0, in effect on the blank page preceding.

We are also required to read here that apricot stones carry a poisonous pit. As we begin with the beginning: a, and a new myth of creation, we are also required to read that within the first creation is the means of its end; or maybe not so equivalent, maybe, just that a degree of toxicity is necessary for life. And also, that, like the mark of Cain, is part of creation from the very beginning.

By combining number with alphabet, Christensen is taking us back to the earliest use of languages, Sumerian, Attic Greek, but with a more modern twist.

With paragraph 2 we have:

Already on a linguistic level we have an incantatory pattern forming. On the chemical level we now have bromine and hydrogen.

Bromine, like hydrogen, is potentially lethal. As, indeed, are the seeds of bracken. This new pastoral suggestion now allows us a reading that suggests an early, a volatile, Precambrian period in our creation myth.

We now have three levels of reading: of the text, of chemistry, and botany. If we accept the time scale, four levels: botany, chemistry, textual, and time.

As a reviewer notes: “The useless abundance of bracken, succulent berries -- and corrosive bromide: the unbalanced mix all around us. Hydrogen seems, here, almost safe, but the "bomb" suffix is not long in coming.”

“Alphabet’ was written during the 1970s, a period that lived under and reacted to, above all else, the possibility of immanent nuclear war, the hydrogen bomb.

The levels expand: arboriculture, botany, chemistry, entomology, physiology: from basic classifications, to subclassifications. We move from Platonic forms, through Aristotelian classification, to our modern forms of knowledge. And zeroing in from the macrocosm to the microcosm, from the external world to the brain’s inner world, as source and site of knowledge, intelligence.

Following the Fibonacci/alphabetical systems through the book we arrive at N, with six hundred and ten lines. Mathematically ‘n’ can be any number.

So far in the poem sequence, we have moved from basic forms to gradually emerge into a world of killing, the hydrogen bomb, pain.

It must be remembered that mathematics is the vehicle of proof for the sciences.

With 5-E (eight lines) we also get, delightfully:

widows and elk exist; every

With 13-M and 14-N we arrive at actual times, with dates: morning June twentieth……..evening June sixteenth….morning June twenty-sixth. To get here we travel through excerpts from lives, suggestions of Rilke’s Sonnets to Orpheus, and:

in mid-November, a season

when all human dreams are the same,

a uniform, blotted out history

a couple of mute parents stand there,

a dog, and some children run around,

an arrival they try to imagine

as water that’s raised to my mouth

I lay sleeping inside my hotel room;

:the stories we have inside ourselves we cannot always make sense of, but continue to pick over in our isolated moments.

‘13/M’ begins with metal, the ore in the mountains and then explores the hidden or covered things:

darkness in mine shafts, milk not let down

from mother’s breasts, an ingrown dread where

and export of fathers, half bullies

layered light, as if behind

layers in a fresco the snow

13 also replicates the Fibonacci numbering in stanza lengths. We have five, eight, then thirteen line stanzas, and then followed by new sets. The interweaving of themes and items from earlier sections tie-in here; we once again come across bromine, but applied differently, and apricot trees: their applications multiply and evoke moments from a life, from an ideal of living. The fabric grows wonderfully rich and rewarding, full of complex patternings.

The Fibonacci system deals also with the proof of the Golden Mean.

Christensen has exhibited a growing concern with ecological matters, as evident in her Butterfly Valley: Requiem. This sequence is a series of conventional sonnets, the last line acting as the opening line of the following sonnet. The last sonnet of the sequence, sonnet fifteen, consists of all opening/closing lines. This sequence perhaps represents her approach to that Golden Mean.

Charles Lock and Jakob Stougaard-Nielsen, in their Guardian obituary notice, noted of Butterfly Valley: Requiem ‘ the division of… 14 lines having been recognised in the Renaissance as akin to "the golden ratio".

We may have lost all sense of security, safety; Inger Christensen here posited the possibility of a higher sense of stability, of a grand working towards/unraveling of, a non-theistic scheme of things of which we are all a part of the process.

Are the images Christensen uses purely random? And do we mean by that ‘mathematically random’? Is it random in the way that creation appears to be random? Is there such a thing as random? All these questions are implied by the system she uses. She requires a response from the reader: for her writing is part of a two-way process.

When Ginsburg said, ‘First thought, best thought’ and so helped launch Beat poetry, what he meant was ‘and not that overwrought, over-formulated stuff (of Lowell, Tate etc)’.

Beat poetry cannot be read in isolation from the dominant systems of the time; it is a response, and as such needs must be read as part of a dialogue to be understood fully.

A poem, is in a sense, a slice of its time; it carries the characters, preoccupations, biases and mental attitudes of the time it is written.

A written work must work hard to acknowledge these, and the taken-for-granted, as well as the limitations of knowledge, areas of ignorance, epiphanies, problems, and take on the challenge of its medium of expression.

A writer has all the wealth, depth and breadth of everything that has ever been written, to call upon. Poetry explores the thesis that ‘writing is knowledge’; the implications of this, and the possibilities it affords us.

◄ Stuff the Distance Between Us