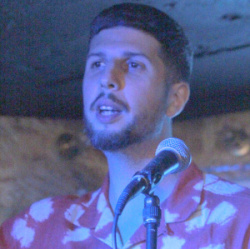 Anaxagorou is artistic director of Out-Spoken, a poetry and live music night in London, and publisher of Out-Spoken Press. After the Formalities,  published by Penned in the Margins, is his first poetry collection. Bernard’s Surge is their debut collection. Other poets on the shortlist include previous TS Eliot prize winner Sharon Olds, Fiona Benson, Paul Farley, Vidyan Ravinthran, Deryn Rees-Jones, Roger Robinson, Roger Robinson, and Karen Solie.

This year’s prize judges are John Burnside, Sarah Howe, and Nick Makoha. The winner of the 2019 prize will be announced at the award ceremony on Monday 13 January 2020. More shortlist details