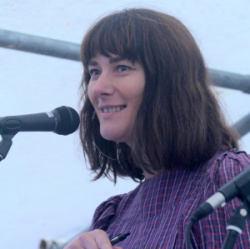 We are delighted to announce that leading performance poet Louise Fazackerley has become a director of Write Out Loud. The Wigan-based professional poet and artist-in-education cut her poetry teeth at open-mic nights at Write Out Loud Wigan, and later won the Radio 3 The Verb New Voices commission with her spoken word show Love Is A Battlefield.

She has appeared on Radio 4’s Women's Hour, Radio 3’s The Verb, BBC Radio Lancashire and BBC Radio Manchester, blogged for The Guardian Northerner, and recently toured with John Cooper Clarke.  Alongside her own work, she has a particular interest in combining contemporary dance with poetry. As an inspirer of novice poets, she works with youth groups, and recently ran workshops with youngsters taking part in Marsden the Poetry Village’s Young People’s Project.

Louise, who won the UK heat of the Commonword Trans-Europe Expression Slam in Manchester on Wednesday, posted our news on Twitter, saying: “Very proud to announce I'm now a Director at Write Out Loud. Without which, I wouldn't have become a professional poet. I'm looking forwards to working alongside the other directors making more performance poetry projects happen.”

She took over compering duties from fellow Write Out Loud director Julian Jordon halfway through the Poetry jam at Marsden jazz festival on Sunday, and introduced youngsters who had taken part in the Marsden youth project, including two of the competition winners, Tilly Clear and Jacob Sykes, and primary school pupils from Lily Lane in Moston, North Manchester, where she is writer-in-residence.

Write Out Loud is a Community Interest Company (CIC).