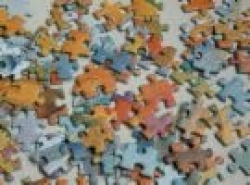 She has always loved jigsaw puzzles
as far back as he can remember
she gets at least one a year
and leaves it on the kitchen table until it's done
she gets the 1000 piece puzzles now
her latest one is of lighthouses
They talk a lot on the phone
he started college this year
she loves to hear about his day
anything, everything he does
it doesn't matter what they talk about
because all she really wants to hear
is his voice
"I've been working on this thing since August"
he can tell she's really irritated
"1000 pieces, and I can't find the last damn piece"
he tries not to let her hear him chuckle
she has no idea how funny she is when she gets mad
it's November and after all the time she's put into it
she's sitting there on the other end of the phone
totally pissed because one piece is missing
"And it's right in the center where it's glaringly obvious"
When he walked in the door, he could smell the pumpkin pie
it was great to be home for Thanksgiving
he almost fell over when he came in the door
because she ran through the kitchen
and threw herself at him, laughing
and crying, and he spun her around
She's so happy he's home for a few days
he's going to help her put up the Christmas tree
just like they've been doing for years over the Thanksgiving holiday
she's also hoping she can talk him into steam cleaning the carpet
and replacing the balcony screen door
"And if I'm lucky, maybe he'll find that damn puzzle piece"
"Tomorrow I'm getting the turkey in early so we can eat by noon"
Any time was fine with him, as long as he can be here
"I'll make you a sandwich while you put your stuff away"
He walked past the kitchen table towards his room
With his bag slung across his shoulder
And glanced at the jigsaw puzzle
"That's great" he thought to himself as he noticed
The center piece isn't missing anymore

Hi lisa, this is really nice. I enjoyed the story/poem, seems so real life. great stuff!

Really like this poem an upbeat piece, pun intended... ha ha clever in it's conception too, My Mum does jigsaws ;-)
TC X