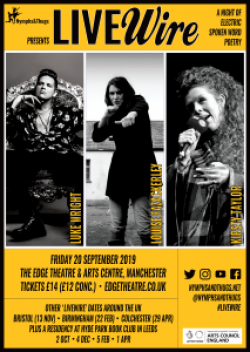 Luke Wright, Louise Fazackerley and Kirsty Taylor will be performing at The Edge in Manchester on Friday 20 September and kicking off a nationwide tour organised by Leeds-based spoken word record label Nymphs & Thugs.

The label’s founding owner Matt Abbott said: “I’m addicted to watching spoken word, and when it’s presented in the right environment, it can be a life-changing experience.”

Some of the UK’s leading spoken word artists will perform at eight ‘LIVEwire’ events between September 2019 and April 2020. Other dates are in Bristol (13 November), Birmingham (22 February) and Colchester (29 April) plus appearances at Hyde Park Book Club in Leeds (2 October, 4 December, 5 February, and 1 April).

Nymphs & Thugs was formed in 2015. It has been entirely self-funded, but this project will be part-funded with support from Arts Council England’s National Lottery fund.  ‘LIVEwire’ is also the name of a Salena Godden album which was shortlisted for the Poetry Society’s Ted Hughes award in 2017. More details 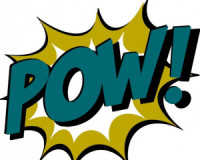