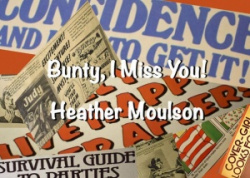 Heather Moulson is a spoken word poet like no other. Her poems of adolescent reminiscences catalogue the slights and affronts she received as a teenager, her reality behind the romantic tales of the girls’ comics of that time. She doesn’t mince her words; the poem titles in her collection include ‘Nasty Old Bitch’, Traitor’, ‘Scrubber’ (parts one, two and three) and ‘Bloody Liar’.

Heather portrays herself as a put-upon innocent –or rather, not put-upon nearly enough:

When you had a boyfriend I invented a better one:

And I pretended I did the same things with him as you.

My pulse quickens as you put the Standard through our door.

… You could have had everything –

I wouldn’t have minded.

The collection’s title, Bunty, I Miss You!, has given publishers Dempsey & Windle the opportunity to come up with an eye-catching, comic-book cover. Bunty features in the poem ‘Seventies’, but only as an organ quickly ditched in favour of its brassier rival Jackie, before a brief flirtation with Henry Miller:

He gave us what Bunty never could.

That man was so awful.

What was hell was that?!

Oh Bunty, I missed you!

Those readers dismayed by exclamation marks in poetry, look away now. Although boys and the poet’s lack of success with them feature largely in this collection, another strong theme is class embarrassment. Young Heather is yearning to be invited round for tea with posher friends, fearing being let down by her mother on her home turf (‘Tea Time’), or revolted by working-class fare - “Picking at winkles and whelks resembling snot” (‘Sunday Nights’).

The other side of the street is always more enticing. The “orange bay windows, the colour of Quality Street” are contrasted with “the coal fire warming our fronts while our backs shiver” back home - a pleasing accumulation of detail in the opening poem ‘Why?’.

Fleapit cinemas that end up as Turkish grocers, Sindy, David Cassidy, Donny Osmond, they’re all here – an uncanny recall for details of the 1970s. The 60s (“bastard free school milk”) get pretty short shrift, too. The poems are not bathed in a rosy glow of nostalgia – quite the reverse. Performing them, Heather takes her revenge on a number of school enemies and erstwhile friends, although always with a big smile on her face. And she is often poking fun at her younger, naïve self, as much as at anyone else. Some of her poems read like stand-up comedy scripts, although the jokey tone fails to conceal a degree of pain suffered all those years ago. Decades on, a poet gets her own back – an outcome the storyline plotters of Bunty and Jackie could never imagine.

Heather Moulson is also an adept cartoonist, regularly portraying her unequal relationship with her irritable cat Dobby on social media – and a book from Dobby’s point of view preceded her own poetry into print. Her own collection Bunty, I MIss You! is a giggle but also poetry with sharp edges  - and that’s why Heather Moulson’s unique style is so appealing, and somehow impossible to categorise, or to resist.

◄ 'The rapid clatter giving place to the slow click'

Great review for a great collection Greg! I would be rushing to add it to my shelf, but I have it. already dog - eared.