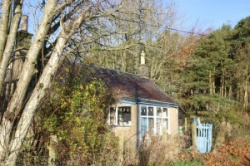 A poetry reading to raise funds to help restore Brownsbank, the home of Hugh MacDiarmid, will take place at the Scottish Poetry Library in Edinburgh on 11 September.

MacDiarmid has been described as Scotland’s greatest poet since Robert Burns. He is best known for the work he published in "synthetic Scots", a literary version of the Scots language that he developed. He was born Christopher Murray Grieve in 1892 in Langholm, Dumfriesshire.

He entered journalism in 1910, and joined the Royal Army Medical Corps at the outbreak of the first world war. He was a member of the Independent Labour Party from the age of 16. In 1928, MacDiarmid helped found the National Party of Scotland, but was expelled during the 1930s. He was also at times a member of the Communist Party of Great Britain, but was expelled twice. In 1922 the poet began using the "MacDiarmid" pseudonym with verse in Scots. His poetry is often characterised as lyrical, argumentative, polemical, and contradictory.

He lived at Brownsbank Cottage from 1952 until his death in 1978 at the age of 86. The charity MacDiarmid’s Brownsbank took over the cottage and its contents in 2016, and now aims to restore and upgrade it.

Poets Gerry Cambridge, Richy McCaffery, Elizabeth Rimmer and Colin Will will be reading at the fundraising event, which is being organised by Red Squirrel Press. It starts at 7pm at the Scottish Poetry Library. More details

'The rapid clatter giving place to the slow click' ►