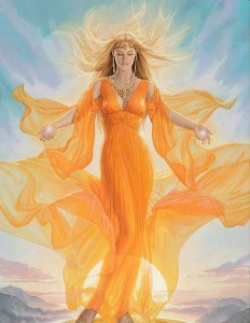 Inspired sometimes you feel but where do the words vanish. I scratched my head for a while but the result was no different. Some vibes were striking me off and on to write, but I wasn’t getting the control on vocabulary. Alas! The will inside was to showcase the eminence of the attraction I couldn’t let my eyes off today. Frankly speaking your halo radiated all around and every time my eye sight slipped through the angles and corners of my eyes, it captured you sometimes blurred. But that’s the truthful confession of the day.

A Goddess had perhaps descended in her total might,

She lured me totally and fascinated my eye sight.

She emitted an aura as her persona shone bright…

Tresses left open and free, she was a beholder’s delight,

She knew the charm to seduce without even a word said.

A manifestation of the supreme, her every move said…

She not only led the masses, she let them fed…

She was by far the best and far ahead.

Dressed in yellow however lips concealed…

A utopian beauty is all that she quietly revealed.

The pains forgotten and all the wounds appear healed,

Some divine intervention that the very moment she sealed,

I could notice an ecstatic flow inside, a different yield.

My joy travelled far and vast, as if it was wheeled.

Dressed in yellow she softly executed…

Threw spears and arrows, and the devil was defeated.

The devil lost its powers and it gradually retreated.

The Goddess threw the noose before he was seated;

It stuck up in his neck and he got impeached & prosecuted.

Dressed in yellow that extravaganza look,

She mesmerized minds and brought everyone to the book.

I tried my best to think beyond and though the thoughts were travelling at the speed of light but the frail fingers of the ordinary human being couldn’t match the pace and it lost the race on the keyboard. Flow of thoughts at times was so celestial that my mind had to refer the thesaurus to comprehend the meaning of what was going on like an angelic dictation. Perhaps it is an experience to keep with me. I didn’t know the charms could be so extraordinarily impacting one’s thinking and expression. Whatever it is today was a unique day and Yellow has confidently ruled every time limit.