If you can meet with Triumph and Disaster
And treat those two impostors just the same;

With their backs against the wall

Held up an Aussie onslaught

On a sunny Saturday in Yorkshire.

Boycottesque, he only scored 2 in 50 balls,

England needed 359 runs to save the Ashes

Stokes gave us hope, steadily and in flashes:

As if, in the cauldron of Leeds, nobody else was there,

More like Eden Gardens in Kolkata than steady Headingley in Leeds,

Only one man stood between the Aussies and the Ashes,.

England's last man in was the bespectacled Jack Leach,

By scoring a brilliant 1!

As risks paid dividends, And how.

With his back against the wall 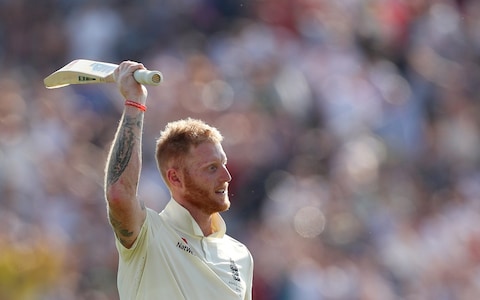 Thanks Tommy, A Fish and Kate. Yes fantastic atmosphere Tommy. I'm saying nowt about Yorkshire folk liking to get their money's worth! It's nice to find out you're an Aussie Kate. I have a nephew in Perth. At least you'll know what cricket is, unlike most of our American cousins. They play a simplified form of cricket called baseball (wink!) don't they?. Strange how many games/sports were invented by us Brits. Nothing better to do, I suppose. Cricket began in SE England in the C16.

Well, being an Aussie I can't say I'm thrilled about the result. At least he is a redhead. ?

I listened to the BBC 5Live broadcast and some of the final runs were responded with in roars of approval and near delirium that were the greatest that I have heard at a cricket match.

Hi John - it's my wife who's the real cricket fan but I often watch the highlights. I liked the expression on his face as he saw the finishing line coming up, *maybe*. You capture it good. ><>