Competition closes in 16 days, 11 hours. Get details and Enter. 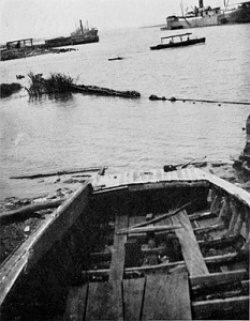 The rope is tight like a well-tuned cord. Alas but who's to walk it?

The bugle has blown! The man and his one hundred souls embark.

But a thousand despondent souls’ death-boat, ain't no Noah's ark.

A floating sarcophagus in disguise. Clad in the skin of a godly ark

Dip-dip your hands deep-deep! Dip deep in your hole-ridden pocket!

Oh after you I insist! Hope has docked! All you lucky souls embark!

A silver piece, The Golden Fleece! Ithaca, land of solace and peace!

Don't mind the plank! It’s an ornament! Nobody ever has to walk it!

Owards to Canaan! Where milk and honey well instead of injustice!

The irony blazes the liar’s tongue! Every time he speaks of injustice,

The man laid his yellow-brick path of rust and now he has to walk it.

-of mind. He counts the dead in his head as a hundred souls embark.

Up it goes and down it goes! On the boat of perdition they did embark

One hundred souls muffle the voice, crying: "Be wary of the injustice."

This is a song of hyenas and men, of life and death, of war and peace.

Hades' ferry was temporary, the waves washed off the deceit of the ark.

Empty of one hundred souls, the man’s dirty hands feel his fat pocket

Land ho! Your plank is set! All you fooled souls now prepare to walk it!

For the road to salvation was just too long. To die would be to walk it.

And yet a hundred souls fought hard today. Tooth and claw to embark”

Out of grandma’s mattress and straigh into the slaver’s greasy pocket!

Oh people of the free world, hear this song. Hear this tale of injustice.

Oh vain Ulysses, and you oh, tricked Jason. Farewell and rest in peace.

Mother (Love In The Time Of Disapproval) ►

Thanks Heart! Did my very best with this one...tough it was! ?
Mae

So many stories expertly woven together! Love it!

Thank you Jason! It's one of my favorite lines! ?
X.x.
Mae

Got to say Mae I'm with everybody else on this, I like the shanty version but I prefer this one, and, "Dip deep in your hole ridden pocket," is inspired.

Thank you so much Adam! It's a bit of a challenge but after your suggestion maybe I'll try to record it!
Thanks ?
Mae

I got so drawn into this and would love to hear it. I'll go look on the audio. My favorite lines are:

A floating sarcophagus in disguise. Clad in the skin of a godly ark

Dip-dip your hands deep-deep! Dip deep in your hole-ridden pocket!

Oh after you I insist! Hope has docked! All you lucky souls embark!

Thank you for taking the time Martin! The vote is unanimous! I too prefer this one. It's just that I always haventrouble with the rhythmic part, hence the yo-hos...
Thank you?
Mae

This is simply brilliant Mae. It delivers the whole scenario of what it wants to say so well. I definitely prefer this version.
Love it

Yeap, it's summer, and a very hot one at that! And I have a lot of time in my hands! Thank you dear Lisa! ?
Mae

You've been quite busy Mae!
Bravo on both versions!!

Thank you for taking the time dear Branwell! I think I agree with you! Thank you ?
Mae

I think it's better without the yo-ho's, simpler and easier to read

That is the my Sestina stripped of the "yo-ho"s after a suggestion. Any thoughts?
Thanks all ?
Mae