Competition closes in 16 days, 4 hours. Get details and Enter.

THE TRUE AUTHORSHIP OF THE PLAYS OF WILLIAM SHAKESPEARE 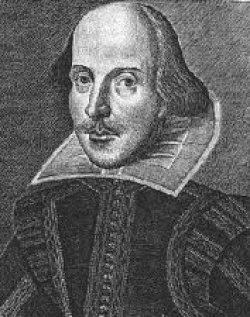 (A competition poem submitted on the theme of "Who Wrote Shakespeare?" run by the Shakespeare Oxford Fellowship.  I thought they could do with a bit of culture.  Worldwide fans will recognise this as a tired old re-post, topped and tailed for the occasion).

While this debate is at its height

I offer you a scoop tonight;

I shine a fresh revealing light

(Think me not knave nor jester!)

So let me end scholastic wait

For certes do I boldly state

His works they earned him some renown

But Fester’s titles let him down

Promoters would all groan and frown -

They couldn’t be much shiter;

So hence they fetched in Bill Shakespeare

The first one that Bill Shakespeare changed

Had Uncle Fester near deranged

He didn’t think there nothing strange

With “Much To Do ‘bout Bugger All”;

He slashed his red quill most severe

As altered titles would appear

And Fester was appalled.

And simply for box office pennies

He cynically changed to “Venice”

About a strike at t’pit.

He gave that Stratford playwright hell

When “Turned Out Nice for Our Raquel”

Was changed to “All’s Well that Ends Well” -

“Measure for Measure” he lambasted

“Fill my Pint You Thieving Bastard”

But Auntie kept him in check.

But when he heard he’d been abridgin’

“Shall I compare thee to my best pidgin’?”

He renamed dramas quite sublime

Then went beyond these tight confines

By tinkering with single lines

From “Thou mun please thissen”.

“Wherefore art thou?” he thought thin

Compared to “Where the bloody ‘ell ya bin?”

“Lend me your ears” was dire

Apoplectic he was sent

“The Winter of our Discontent”

Was changed from the more eloquent

“Chuck some coil on t’fire”.

Thus with his silly beard and ‘tasche

The charlatan impressed her.

But good things come to him what waits

And authorship this day I state

Don
What ye think ye’ve got all wrong
It was Fester all along.

Seems Fester's affected your thinking
From here I can hear your brain huffing
It must be quite bad cos it's 10,000 miles
And really it's Ado About Nothing.

I still got my bets on Willy...

Shit John are you buggering up
My whole learning of Willy?
Methinks you just are playing games
Gone down the track of silly

Many thanks, Kev and Ray.
And also to Ankita and Devon for the "likes".

Phantasmagorial tha'nus. A delightful trawl through the vagaries of the Shakespeare canon with that delicious Blackadder sensibility to coax it through its paces. I can't say enough except that I was utterly amused and conflagrated .

Thanks for cheering me up John

And this is why you are a legend at the Doncaster brewery and tap. Always a pleasure.