We've Turned Into a Throwaway Society 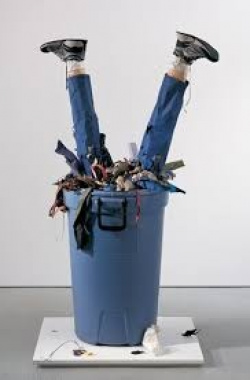 We've Turned Into a Throwaway Society

Society has now made us lazy

We throw away sox when they hole

Why bother with effort to darn them?

Who of us now does this on WOL?

Much easier to spend a few dollars

Drop into a store and buy more

Must admit I do feel a bit guilty

When binning holed sox that I wore

My mother would always bring needle

And thread out when sox became holed

She followed the tradition of her mother

Just mend them when holed she was told

We've turned into a throwaway society

It's values I hate, but I find

It's so easy to fall into laziness

◄ You're Wasting Your Time

New Candidate for the Presidency ►

The issue to me seems to be we don't collectively think there's a REAL problem. We're still consumed with greed, selfishness and me-first. So how does one change this? - education? hit to the hip pocket? hard restrictive laws?. The trouble is we were given greed DNA at the Garden of Eden......

We have spent a couple of centuries as a, "Take, make and throw away society," except when either money or resources have been in short supply, and it didn't have too much impact at first. But, when you consider that in 1800 our population globally was estimated at about 1 billion, in 1970 it was 4 billion and now it's about 8 billion. Everything we do now is amplified by the number of us doing it. Personally, I think that there's a good chance we'll be the authors of our own demise because we don't take it seriously. Really like this Don, great subject matter.

Interesting on various levels. We repaired in the past because money was scarce - the mantra was "waste not, want not". With
increased incomes, we began to buy new and thus contribute to the
general health of the economy. Now, we are serious about the
business of recycling and feel better when we throw out stuff that
in other times would be held back for repair, renovation...call it
what you will. We act according to how we are allowed to act...be
it via additional income or outlets for our discarded stuff to be put
to further use. The primary object should be to avoid letting the
latter fall into disuse but instead produce other things...for example,
in the way that plastic bottles can somehow be turned into garments. That's proper "productive" thinking!

That's what the poem's all about. We're creating it.