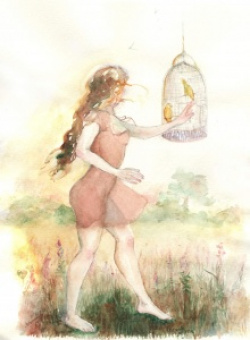 And after she heard them fly away
she could barely look backwards
all the way back to her car
and must have stood there
for at least five minutes
before she opened the car door.

Its what she would have wanted
she told herself all the way back
the tears falling slowly down her cheek
despite knowing deep down it was the opposite
her regrets carried across the breeze
as she heard them fly towards over the cliff.

Its what she would have wanted she told herself
listening to their howls of delight
when they left the cage to the sky
her words melting like
snowflakes in June in seconds
rolling in the gutters in sighs.

More of her work can be seen at https://www.instagram.com/mironenko.victoria/)