The Quality of Mersey, edited by Barry Woods 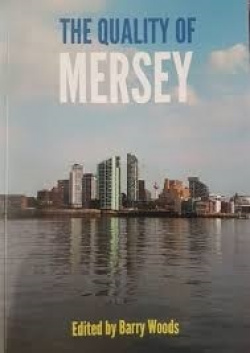 Knowing your place is all the rage these days; just look at the well-deserved success of the current Places of Poetry map. (And if you haven’t already posted a poem or two up there, make sure you do so). With that in mind, it’s well worth reminding Write Out Loud readers of an anthology that came out last year.

It’s a collection of poems that follows the river Mersey from source to mouth. From an original idea by Birkenhead’s John Gorman, poets from writing groups and open mic nights were invited to contribute to the project, which has involved performances at a variety of venues.

The book begins, as you might expect, with ‘The Source’, Liz Sandbach’s “trickle of tributaries and shallow bogland streams”. Carolyn O’Connell’s ‘Debut’ invokes history, and the fact that the Mersey may have formed the boundary between the ancient kingdoms of Northumbria and Mercia:

Your voice sings the strength of Mercia’s lost kings

You hold strong the boundary trench between

The Mersey is also or otherwise said to start at the confluence of the rivers Goyt and Tame in central Stockport, a fairly undignified beginning for a river made world-famous by Gerry and the Pacemakers, via a culvert under a shopping precinct, and close by the M60. As John Lindley in ‘Confluence’ puts it: “This one, from culvert and spring, sprang / from Pennine past Primark”. The river “hemmed in by soulless concrete” is lamented by Liz Leech: “How can mankind treat you so? /// Drown your chatter by / motorways’s ceaseless drone.” (‘The Source to Sale’)

From here on, things get better. Andrew Rudd’s ‘The Idea of an Estuary’ is perhaps the poem that holds the anthology together, likening the sea to a tree with roots, a hand with wrinkled skins and “slow tendons”.  Jo Vick’s ‘The Mersey Calls to Me’ is a paean of praise to Liverpool’s waterfront,  while Josiah O’Brien’s ‘The Sun – Not Welcome Here’ refers to Merseyside’s image problem:  “Confined social housing / Multi-occupancy / More drugs, less fed, cracked minds, no bed. / There’s no magic money tree.” However, it ends in defiant triumph:

But let the coaches in to see

The Mersey, our crowning glory.

And while you’re here

Listen out for Liverpool’s untold story.

The anthology’s editor, Barry Woods, contributes ‘Cammell Laird’, about the Birkenhead shipyard that has survived “seas of war and recession, through storm eyes / and wrecks of rusted ocean,” and is still going strong today. Greg Quiery’s ‘On Exchange Flags’ has the rhythm of a sea shanty, and looks back at the days of King Cotton:

Cotton for tyranny, hardship and slavery

Cotton for unions, resistance and bravery

Back in the glory days, long since forgotten

It came by the Mersey, that snowy white cotton.

There is sometimes a sense of loss. Landmarks like New Brighton’s Eiffel are recalled by Paul Waring, “a ballroom / where the Beatles played; now lego-estate / still life, stamp-sized gardens in cul-de-sacs.” (‘A Long Walk’).  But generally this anthology does not dwell on the Merseybeat heritage, that time in the 1960s when Liverpool was fab; there’s an acceptance that this river has its moments of bleakness.

What does emerge from this anthology of honestly-wrought, and often heartfelt poems is a sense of  community, emphasised by the fact that the book was always intended to be performed, and has been put together by groups of local poets. Their readings tour is intended to finish on October 3 – National Poetry Day – at the Museum of Liverpool.

Wigan Write Out Loud at the Old Courts tonight ►