Barry Woods studied creative writing with the Writers Bureau and settled on free verse poetry after that. He was tutored by award winning poet Alison Chisholm who guided him into publication in 2002. He moved on to explore performance at Liverpool's Everyman Bistro, a regular gathering for poets and playwrights. He's had over thirty poems published and performs occasionally at spoken word events in Liverpool/Wirral. He edited the anthology 'The Quality of Mersey'. It was performed as a live poetry relay on National Poetry Day at Liverpool Central Library, 2018, and toured Merseyside throughout 2019 ending at the Museum of Liverpool Life. He received a Poetry Medal of Honour from Wirral's John Gorman for work on this project. He has volunteered with local councils organising groups of poets to perform their work under Luke Jerram's Gaia at Liverpool Cathedral, and Museum of the Moon at Birkenhead Town Hall. 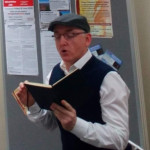