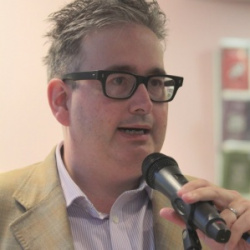 Andrew McMillan, Alice Oswald, and Todd Swift have emerged as the three candidates to succeed Simon Armitage as the next Oxford Professor of Poetry.

Voting will open on Thursday 23 May and close on Thursday 20 June. The result will be announced the following day.

If Alice Oswald wins, she would be the first female Oxford Professor of Poetry. The only woman elected so far to the Oxford post, Ruth Padel, resigned nine days after the vote in 2009, before officially taking up the role, amid claims she had tipped off reporters about allegations that a rival, Derek Walcott, sexually harassed students.

The candidates’ supporting statements will be published online when the ballot opens, although the outsider candidate, Canadian poet and publisher Todd Swift, pictured, has already issued a manifesto on Facebook.

Describing himself as the “change candidate”, he said: “I admire both the other poets on the ballot. They're brilliant. I'm a poet also, of course, but what I offer is the change and excitement that comes from the underdog winning. I am the change candidate. I am not expected to win. I am unlikely to win. I am okay with this. But if I was elected, it would challenge the whole UK poetry system to rethink how it establishes the poetic canon. I would be the first New World professor of poetry - and I would be the first to have so openly promoted myriad new multimedia poetries for over two decades - spoken word, slam, ebook, and anti-war poetry - and the first to so openly champion fusion poetry - that is, the hybridity that so many poets now seek.

“My aim as professor would be to celebrate just how utterly open the possibilities are for making future poetry in the UK and beyond - and how we have so much more to rediscover by reconsidering the poetry already available to us, much of it unread or underappreciated. I represent the small press poets, the indie poets, the outsider poets, and those who experiment in many new ways, online, onstage, and in recording studios, or at home with their iPhones. I celebrate Instagram poetry, and will seek to take it seriously. I will keep an open mind, and seek to open others, as well.

“A vote for me is a vote for precisely whatever the expected, the usual and the status quo would not be. A vote for me would be a sort of astonishing creative act, like a new poem. So here is my platform. Let's astonish the world with this vote, and show that anyone who loves poetry and knows poetry, regardless of their background or formal education, class or nationhood, status or fame, can achieve the impossible. Because whatever else it is, poetry is about achieving the impossible.”

A new Oxford Professor of Poetry is elected every four years, and their responsibilities include giving a public lecture each term. Voting will be open to members of Convocation, a group that includes a quarter of a million Oxford graduates who have had their degree formally conferred, and several thousand members of staff who make up the university’s ‘parliament’, known as Congregation.

The result of the election will be announced on Friday 21 June. All those with a right to vote who intend to do so must register via the election website.

Todd, sadly, can't begin to compare with the other candidates. What would shake up the poetry world would be to have a woman or a gay man in this post; someone with a solid reputation for their work in all areas.

Stu, that's a valid clip to throw in.

Anyone who advances in the field seems to work on the print side of poetry to some degree, but if the Oxford post retains some intrinsic value, and it may, the role belongs to a poet first. Todd should at least compare with, say, Alice Oswald on skill & theory. Looking over a few poems online: there's a gap.