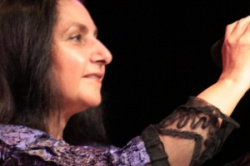 A poet who describes herself as a Scottish Muslim Calvinist, and who now lives between India, London, and Wales, has been awarded the Queen’s Gold Medal for Poetry. The Pakistan-born British poet Imtiaz Dharker was born in Lahore in 1954 and grew up in Glasgow as what she calls a “Muslim Calvinist” before eloping with an Indian Hindu to live in Bombay. She later moved to Britain when she married the late Simon Powell, the founder of Poetry Live!.

She added:  “Hers is a unique perspective and an essential voice in the diversity of English-language poetry. It is a moral force – a force for good and a force for change – that refuses to see the world as anything less personal than an extended village of near neighbours sharing in common struggles for how best to live.”

Dharker said she still could not believe she had won. “My first thought was that I wish my father were alive to hear this. In the last few weeks before he died, at almost 100 years old, he didn’t always remember his children, but did speak of the Queen with great admiration. The fact that this is her medal for poets, an award from her, feels very personal to me.

“It also feels like a connection to a whole line of poets who have been my heroes, all the way from Auden to UA Fanthorpe to John Agard. It reminds me how Britain has opened its heart to many kinds of poetry and somehow recognised and made space for the unexpected voice.”

Dharker’s poems are studied by GCSE and A-level students throughout Britain and, with Poetry Live!, she reads to more than 25,000 students a year.

Her collections include Purdah (Oxford University Press), Postcards from God, I speak for the Devil and The Terrorist at my Table (all published by Penguin India and Bloodaxe ), Leaving Fingerprints (Bloodaxe) and 2014’s Over the Moon (Bloodaxe).

Her many readings this year have included the Troubadour, Winchester poetry festival, and Manchester’s Poets & Players.

◄ 'Separating and combining the senses': the art of the poetry film

A Muslim Calvinist... whatever next.