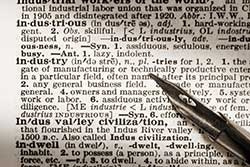 We were challenged to write a poem inspired by two randlmly chosenpages in a dictionary, thesairaus or encyclopedic book. This is my offering

He pores through dry pages of politicians' dry political thoughts

Seeking inspiration from giants of history

Is this all they left behind?

A verbal point scored, the tickling of a lexicographer's mind.

At Yalta, it's one up to the Brits as Winston opens the score

Teddy has no response as Stalin is compared to God

Adolph, in despair, advises Mussolini on being photographed in swimwear

O, the whit of these masters of mirth

He doubts they submitted their daily task resignations.

In 81, Macmillan said no sensible man would challenge the NUM

If only he knew what she knew, and Arthur knew four years later - no one in Barnsley laughs.

Addressing Mr. Parkinson in the book he asks: If men only enter local politics due to being unhappily married,

Does this improve the lot of their wives?

Barack contemplates his melanin tinge and its pre-election origin

Contrary to Phocion's question, his words are not inadvertently foolish

He titters not, but sighs, closes the book, and closes his eyes.