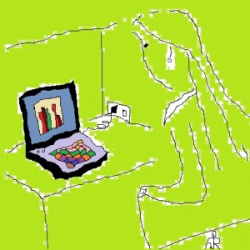 The ocean of emotions that always kept firm,

Wearing a laughter and some smiles more than often;

She was a lifeline… someone, others would throng…

Her temperament was the very key,

Perhaps the reason why she was she.

She was professionally entwined and held a charm,

She carried a character, a noble poise

She made the surrounding stretching and warm.

A fascination of her own yet polite and calm,

She was a force that rolled the eyes,

Her mere smile would nurture the sighs.

There is much more to say and

Much more to write about her, but time.

Perhaps some other day;

She isn’t someone who you happen to see,

Every now and then but you have to agree.

Her magic, her attention and that grace,

The eyes get stuck, really stuck to her face.

She wasn’t a hook yeah a bit of tease,

But that argument may be weak too…

It has never been discussed nor judged.

Mind is good and bad both at reception,

Sometimes it builds a false perception,

Those that are good are actually good,

And she represented a true womanhood.

Strings of emotion yet again, that last day…

The eyes didn’t say but a word beyond,

The lips were silent but not dry.

I had lost the courage to provoke her further,

Witnessed despair in the gloomy weather…

Her glittering face made me feel,

Too much concealed, too much to reveal.