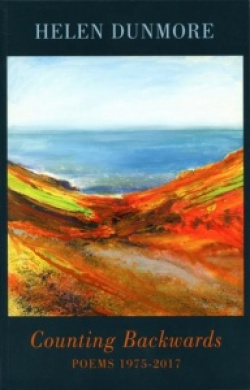 It is tempting to reiterate that Helen Dunmore was a poet first and last, both metaphorically and chronologically, but this would be to see prose and poetry as rigidly separate. To me her poetry always contains a small narrative and by turns, her prose is lyrical. In 1993 she published her debut novel Zennor in Darkness, which won the McKitterick prize. The chronology of these poems shows that she continued to write poetry. One did not extinguish the other although her prose reputation, for novels such as The Siege (2001) and The Lie (2014), probably overtook her poetic.

This collection has been expanded from Out of the Blue: Poems 1975 to 2001 to include her three later collections, Inside the Wave (2017), The Malarkey (2012) and Glad of These Times (2007). It derives its title from the eponymous poem, ’Counting Backwards’, which reveals the sequencing of the collection, starting with her most recent Inside the Wave - which, because of her untimely death, became her last. It stretches through her considerable output, ending with her first collection The Apple Fall (1983). The title’s metaphor refers to the practice of anaesthetists, and those going under anaesthetic, of counting backwards into unconsciousness.

Inside the Wave thrilled the poetry community by topping the bestseller lists and winning the Costa Book of the Year in 2017. Her language in the poem ‘Counting Backwards’ is characteristically accessible: “As the waterfall in the ante room / Grows steadily louder / All of them are cool with it.” As in this quote, the accessibility of language together with the plotting of her narrative sometimes seem more important than the sound and rhythm of the language itself.

The poem 'Inside the Wave' takes us on an Odyssean journey where waves demonstrate the unpredictability of life itself, “about to topple / about to be whole”, but I think by far the most moving in this set, and beautifully crafted in its delicate metaphysical tone, is ‘Plane tree outside Ward 78’:

To find it dissolved, paper

Nothing to do with dreams

Paired with ‘Terra Incognita’ , she takes us beyond death to unknown territory:

is ready for footprints.

In ‘Hold out your arms’, there is an artistic generosity in telling us how this last period feels, and how we can transport it into the comfort of art. ‘Death’ can be a motherly figure to her shy schoolgirl, who will guide her through. Even more generous when we consider that some of these poems were composed on her phone when she was at her weakest.

The Malarkey marked a turning point in her development when its title poem won the National Poetry Competition in 2010, and captures the transitory tempo of childhood and parenthood. ‘The Kingdom of the Dead’ prefigures the poems of Inside the Wave: “The kingdom of the dead is like a mouse/ in the owl’s eye”.

Her visual images are very evocative of childhood and I perused the contents page picking out poems that attracted me in this way. ‘Yellow Butterflies’ and ‘Hearing Owls’ within Glad of These Times; ’The wasp’, (Bestiary,1997); ‘Brown Coal’ (Short Days Long Nights, 1992); ‘ Wild Strawberries’ (The Raw Garden,1988); ‘The plum tree’, ‘The air-blue gown’ (The Sea Skater, 1986).

‘Yellow Butterflies' is Dunmore at her characteristic best - a short poem with a fleeting presence that resonates long after you have finished reading it: “the sun’s fingerprints / ... printing sun". ‘The wasp’ evokes the voice of the insect that still feels the need to sting despite the risks to its own mortality: “the coat of warning / that says what I am.” ‘The air-blue gown’ is a longer poem, its title an homage to Thomas Hardy. Again, she achieves resonance that is so plaintive it remains in your inner ear. She eats the past and consumes its traces through stanzas of differing length, through a journey of different experiences, but still manages to sustain her theme through strong visual imagery and dramatic narrative:

I’m eating the past tonight

licking the child-like socket of an acorn

before each is consumed.

By contrast, I found the Out of the Blue poems a bit more pedestrian, a voice which was trying to establish location and its vernacular, which didn’t work as well for me. Poems such as ‘The Man on the Roof’, ‘Giraffes in Hull’, and ‘Virgin with Two Cardigans’ seemed to stray perilously close to sentimentality.

My father touched his mother’s coffin

and did not say how golden her hair was.

Even I remember how golden it was

when the grey knot was undone.

This is a bumper anthology of around 400 poems, including 15 previously unpublished ones. The seasoned reader of Helen Dunmore’s poems would enjoy the size of this collection, to dip into over time. For the new reader it could be a well-paced introduction to her poems. Their appeal is of storytelling and lyric which at best are perfectly balanced. Occasionally the poems are diluted in terms of the rigour of sound and rhythm, but overall their quality is sustained throughout this massive opus.

Janet Murray has had poems published in The New Statesman, Sentinel Quarterly Review, and Millstone Grit Anthology. She won first prize in the Fish Publishing International Poetry Competition. She gained an MA in writing (with merit) from Sheffield Hallam University

◄ The company of poets: why listening and learning provides that buzz