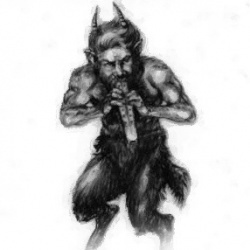 This week's Poem of the Week is 'The Dolphins Seemed Unfriendly' by Dominic James, an alliterative master-class that drops us in the Med, talks of Paxos and Pan, and is delivered with the unfettered imagination and skill of a true poet. A beautiful piece of writing sure to transport you the way only poetry can - just mind you don't get seasick.

Below Dominic answers our Q&A and reveals some more about his writing process:

How do you feel your poetry has progressed since you began writing?

It has definitely come on. As I test the form words gradually fall more readily into sequence and understanding grows - the big but being: I still have to come to terms with the emotional draw of the piece, and I have no formula for that except to make it real in my thoughts, my sense memory, which works somewhere apart from words. I think. I might have progressed further if I’d taken up the piano. ie. more music needed.

Who do you write poetry for?

For the most part, me, with a step or two towards anyone who might be listening. While my view would be dismal indeed if I made a habit of disappearing up my fundamental orifice, my poems aren’t written essentially to please, although to write well would include that too.

Do you have any other creative hobbies apart from poetry?

I draw a bit, sometimes actively though not in a serious way. And I used to write short stories. Hmm, not as creative as I thought: poetry fills a hole.

What was the last poetry book you read?

The Sonnet, by John Fuller, from the series The Critical Idiom. A bookfinder.com bargain, hence the current entry. A good short read. I have two other technical books on poetry, by the way, only one of which I have read. The last collection was Samuel Beckett, Selected Poems 1930 – 1989. Bloody Hell. But you can see the talent.

If you could send one poem in to space to best represent humanity what would it be and why?

Two come to mind, Wm Blake’s The Sick Rose, with its invisible worm, that flies on the night, and Robert Lowell’s somewhat elegiac For the Union Dead. They both, it seems to me, consider the human soul, the duality of our consciousness with its cruelties and compassion. I’ll go with Lowell. Although, curiously, his language is more dated and while he speaks of war, he does broadcast news of the best of us. On Colonel [Robert Gould] Shaw:

He is out of bounds now. He rejoices in man’s lovely,

when he leads his black soldiers to death,

he cannot bend his back.

No sooner had we landed when, at a loss,
we struck out for the islands. not by airplane –
wheels on the shallows – but in the drink, again
cast off into the Med, each a Pangloss –
ebulliance deranged – sailed for Paxos,
island of the  shotgun, Easter rain
whose white chalk gulleys and a firefly lane
lit us home through the olive alleys, moss.

O’Hara was right to remind us of Pan,
the great god Pan, last seen somewhere near
the isthmus maybe down from Ithaca,
in the sparesness of the Archipelago:
I have to go there, but the boat’s tossed so, I can
not swim a stroke: the dolphins, oh! the medusa approach.

◄ The Beat goes on ... Lawrence Ferlinghetti is 100

The company of poets: why listening and learning provides that buzz ►

There are some beautiful lines here Dominic.
Congratulations on POTW

Thanks guys, Stu: that means a lot to me, kind regards all.
Dom.

magical. one of my poems of the year so far no doubt.