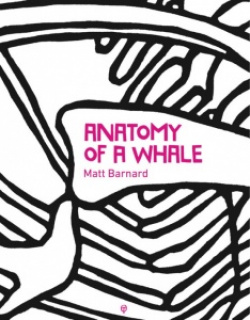 Matt Barnard’s Anatomy of a Whale is disarmingly accessible and at times startlingly original. He explores the underside of the ordinary and aspects of the familiar that are best seen by looking sidelong.

Townscapes like the street in ‘A Lamp Shop’ and rural landscapes like the island in 'The Sore Thumb' are brought to strange life by introducing human inhabitants that define a mood and complete the visual images that are so strong in many of the poems.

In ‘The Sore Thumb’ the owner of an island property, whose plans to make money out of “his place, / so white it seems the stone is newly cut” have rendered him a pariah to his neighbours, is first seen at a distance. Then he

his hopeful face towards us, before someone said

that we might slide by as by doe-eyed cattle

at the water’s edge.

The encounter encapsulates the isolation of the outsider as the poem accentuates the raw beauty of the windswept island. Barnard has a gift for painting word pictures of such places: ‘River in Spate’ is one such vivid poem, to which is added the sight of a deer leaping in the lights of the narrator’s car: “I carry the image with me, her sinuous form / in the headlights, silvering like a salmon in its flight.”

‘The Lamp Shop’ and the street themselves give voice; the only human being is the town drunk, immobile in a doorway, but he completes the picture; perhaps it’s he who enables the street to exist at all now that the shops are closed for the night.

As a metaphor for the human psyche, I enjoyed ‘Border Patrol’, in which an interrogation empties the narrator progressively of the contents of his heart, his conscience, his memories and his faith. Freed at last, he says : “I’m like a man whose suit is stretched out of shape by all the things he keeps in his pockets. / He complains, but he cannot bear to buy a new one.”

I love the image of 'The Day Twilight Went on for Days': the sense of delicate balance, “the sun poised just below the horizon, the golden hour / stretched out like a cat …” and the sense of waiting, perhaps for the end of everything, or perhaps not. The final image of the moon as “a woman, unhurried, holding her face in her hand” stays with me.

There are several stories, many narrated by their protagonists: the map makers in ‘The Scribes Bewail the Earth’s Circumference’ have their own reasons to curse Galileo and do so in colourful terms; ‘Southampton in Paris’ lends a voice to the fatal hedonism of Queen Elizabeth I’s favourite; we hear ‘The Baker’s Tale’ with perversely pleasurable hindsight, and listen to the grief of the survivor in ‘Noah to God’. And there are moments of dark humour: ‘Bride and Groom Consume one another’ is a tale of a (literally) devouring passion; ‘The Anaesthetist’ is not a poem to read the night before undergoing surgery!

These poems can be enjoyed on a number of levels: as images and tales, mythical, historical  and personal, as metaphors for human desires and foibles, ambitions and failures, and as meditations on words and phrases that we take for granted. (Who owns the keys to the poet’s ‘Intellectual Property?’)

Anatomy of a Whale invites reading and rereading: I have found a new favourite among the poems each time I’ve gone back to read them. A consummately well-crafted and enjoyable collection.