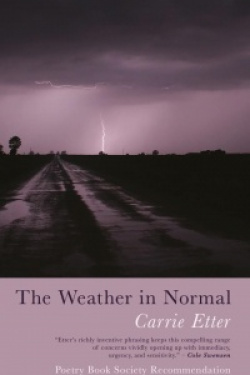 Carrie Etter is one of the few writers who, when I hear she has a new book coming out, I get all excited about because I know it’s not going to disappoint. Her last book, Imagined Sons, was a series of prose poems about what the son she gave up for adoption might be like. It was inventive, innovative and also full of deep feelings and very moving. Those two ideas – inventive and moving – don’t always go together, but in this new book, she once again writes poems that are both full of feeling and that create new spaces in the brain.

This time she combines the themes of grief at the death of parents and climate change, weaving them together with a kind of urgent resolve. They’re set largely in the Illinois town of Normal, where she grew up; her evocation of the prairie landscape beautifully and microscopically exact:

a milkweed pod     its fit in the palm

fat and taut with tufted seeds

The poem, ‘My Father and the Blizzard’, details her father slipping into a coma as a blizzard sweeps through the state. Its final two lines bring the weather and her father together in a kind of sad embrace:

I hope this review can replicate the spaces in her poems, because they open up the poems and make them breathe, leaving space for the reader to put their own thoughts and experiences.

The major poem in this collection is probably ‘Scar’ which describes the devastating effects of climate change on the Illinois landscape, but it’s often the shorter poems like ‘Karner Blue’ (about a butterfly heading toward extinction) that have the more immediate impact.

The book also contains a handful of her spare and often emotive prose poems. ‘Fatherhood’ is about her father’s interest in the weather forecast. Her formal command of free verse is also impressive. It feels as if each word counts, but this is not an austere collection; it has a richness about it that is deep and dark and, despite the grief in the poems, somehow remains very positive.

This is – in the best sense of the word – a lovely collection of poems, and one I shall be returning to again and again.