The Healing Next Time: 'This is poetry about an issue that should concern us all' 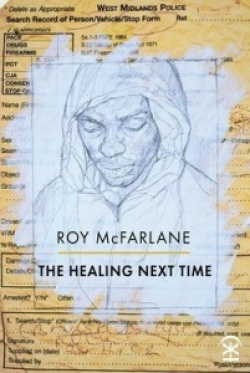 Last year Write Out Loud reviewed a collection by Midlands poet Roy McFarlane that we described as "a serious and determined attempt to document in poetry institutional and everyday racism in Britain". It includes a sequence of poems about 18 people who died in the UK over the last few decades in "scandalous and shameful circumstances, usually involving the police". A number of the deaths led to riots. We are re-posting it now, to show our concern about events and protests in the US following the death of George Floyd at the hands of police in Minneapolis.

Roy McFarlane’s second collection, published during Black History Month last year, is a serious and determined attempt to document in poetry institutional and everyday racism in Britain. There is anger in this collection, but hope, too, reflected in the title, which is a nod to James Baldwin’s essays from the 1960s, The Fire Next Time. But McFarlane, a former Birmingham poet laureate, who was born in Brum to Jamaican parents, ultimately urges that “now is the time for healing” in the final line of the last poem in the book, ‘The beginning of love’.

The Healing Next Time is divided into three sections, in which the second one is perhaps the most powerful. These are poems, often structured as sonnets, about 18 people who died in this country over the last few decades in scandalous and shameful circumstances, usually involving the police. A number of the deaths led to riots.

They include David Oluwale, a British Nigerian who drowned in the river Aire in Leeds after being harassed and attacked by police officers in 1969; Clinton McCurbin in Wolverhampton in 1987 (“somewhere inside of Next a man was held tight / around his neck and they never let go until he was dead”.); Orville Blackwood, who died in Broadmoor in 1991 after being forcibly injected with tranquillisers; and Joy Gardner, who died in north London in 1993, after being restrained by police using a 13ft length of tape stretched around her head.

Other names recorded by McFarlane include Jean Charles de Menezes, mistakenly shot by police “chasing after fugitives on the run looking dark like us” in the aftermath of the London terror bombings in 2005; newspaper seller Ian Tomlinson; the shooting by police of Cherry Groce in her home in 1985, which sparked a riot in Brixton, south London; and the death of Mark Duggan, shot dead by police in 2011.

In the latter poem McFarlane carefully arranges the two, conflicting versions of Duggan’s death side by side. It led to riots in Tottenham, north London – not for the first time – and further, devastating conflagrations across London and other English cities in the summer of 2011. McFarlane ends his poem with these lines: “There are no angels to be found /in the shadows of the death of PC Blakelock,” a reference to the police officer hacked to death during the Tottenham riot of 1985.

The first section of the collection, ‘New Millennium Journal’, covers public and personal events from 1999, including the Stephen Lawrence inquiry, the death of Tottenham MP Bernie Grant, Tony Blair being heckled at the WI, riots in Oldham, 9/11, and the Iraq war. Closer to home, there is the juxtaposition of one woman’s reaction to a small earthquake in Dudley in the West Midlands, and also plans to build a mosque there: “Earthquake? We dow do earthquakes round here …  Muslim mosque? We dow do Muslims round here.”

The narrative is in the third person, and seen through the eyes of a “family man” and “activist”: “He’s speaking at public inquiries, tongue heavy with injustice, / teeth grinding to the sound of another death in custody … There’s a bitter taste, he needs something sweet”.  The family man’s tangled personal life, his affairs and his wife’s distress, is interwoven with the more public events in a way that appears inescapably confessional, and unavoidable; racism is even encountered at a country hotel booked for a rendezvous.

The third section, ‘Gospel According to Rasta’, tries to look at the issues in a more positive light. The opening poem concludes that “in a city of a hundred tongues / we should always make room for another one.” There are conversations between a Rasta character and “the writer”, in which the Rasta tries to calm the other’s anger, and talk him out of any physical retaliation, and a rueful poem about the British habit of queueing, that ends on a harsher note:

And there’s always is this

why we fought two bloody

world wars, to be over-

These are the unmistakable voices of Brexit, that the current prime minister’s antenna seems permanently attuned to, to the shameful exclusion of all other voices.

‘Writings in the Sky’ pays tribute to the international Black Lives Matter movement that originated in the US, and is a reminder of American poet Claudia Rankine’s book of poetry and prose about racism that won the Forward prize in 2015. The Healing Next Time can be seen as a British response to this ground-breaking work; McFarlane, a former anti-racism community worker in Birmingham, talks of “countless hours ruminating over Claudia Rankine” among his acknowledgements.

But his book is nevertheless his own, crafted in a variety of forms, about the virulent disease of racism in Britain that we have yet to eradicate. The optimism and feel-good multiculturalism of the London Olympics in 2012 has been replaced by ugly divisions revealed by a referendum four years later. The Healing Next Time helps us confront this reality, with its recording of the names of past victims, and of injustices that should never be forgotten. This is not just poetry that is about something: it is about an issue that should concern us all.