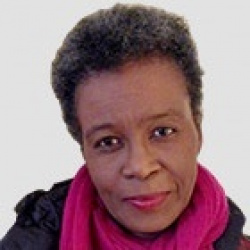 Jamaican-born Claudia Rankine is this year’s winner of the £10,000 Forward prize for the best poetry collection for Citizen: An American Lyric, a collage of prose, poetry, prose poetry, graphic art, photography and scraps of documentary film script, all centred on the theme of racism. The announcement was greet with rapturous applause, with many in the audience at the Royal Festival Hall giving Rankine a standing ovation. The winning collection was described by the Forward prize jury as a “powerful book for our time”. AL Kennedy, chair of the five-strong jury, said: “It’s a stylistically daring poetic project about the dehumanisation of those deemed outsiders - we found it exhilarating and genuinely transformative.

“Citizen is a brave book, with many dimensions: it takes risks, gives courage and provokes profound self-questioning. We read it as a celebration of the power of language, not simply as a call to arms but a call to speak out and to share. Several of us have, individually, pressed this book on others with real fervour. It will, we know, raise questions about the nature, purpose and importance of poetry.”

In an interview after receiving her prize with the BBC's Kirsty Lang, who introduced the shortlisted poets at the reading, Rankine said that the election of Barack Obama as US president was accompanied by the realisation that nothing had changed in race relations in America: "You saw the same slights being enacted ... the birth certificate ... and you think, so now we see, this goes all the way down." She also paid tribute to her US publisher for "taking a chance on this book, in all its hybridness".

Rankine read this extract from Citizen, as an example of everyday racism:

“The new therapist specialises in trauma counselling. You have only ever spoken on the phone. Her house has a side gate that leads to a back entrance she uses for patients. You walk down a path bordered on both sides with deer grass and rosemary to the gate, which turns out to be locked.

“At the front door the bell is a small round disc that you press firmly. When the door finally opens, the woman standing there yells, at the top of her lungs, Get away from my house! What are you doing in my yard?

“It’s as if a wounded Doberman pinscher or a German shepherd has gained the power of speech. And though you back up a few steps, you manage to tell her you have an appointment. You have an appointment? she spits back. Then she pauses. Everything pauses. Oh, she says, followed by, oh, yes, that’s right. I am sorry.

Reviewing Citizen in Poetry Review, Aime Williams said: “The collection is compelling and the experience of reading it is exhausting.” It also includes a piece dedicated to Mark Duggan, who was shot dead by police in Tottenham, north London, an incident that sparked widespread riots in 2011.

Mona Arshi’s Small Hands (Liverpool University Press) won the Felix Dennis prize for best first collection. London-born Arshi, who spent 10 years as a human rights lawyer, drew on both her legal experience and her Punjabi Sikh heritage for her debut collection, which the jury praised for its “imagination, sensuality and beguiling playfulness”. Richard Skinner has reviewed Small Hands for Write Out Loud. You can read his review here.

After receiving her award, Arshi said the collection was dedicated to her brother, "a very beautiful boy that my family lost three years ago. At the heart of the book is a sequence of poems dedicated to him - I think he would have been proud today." Arshi also jointly won the £10,000 Manchester Poetry prize last year, sharing it with Michael Hudson.

‘The Mighty Hudson’ by Clare Harman, first published in the TLS, was awarded the best single poem prize. The poem, a biographical sketch of a strongman who overreaches himself spectacularly, delighted the judges with its “inventiveness and wit”.

AL Kennedy's fellow judges were BBC producer Emma Harding and poets Colette Bryce, Carrie Etter and Warsan Shire. Before the awards 13 of the shortlisted poets read from their collections - Paul Muldoon and Andrew Elliott were unable to be there. They were introduced by a musical performance by Cerys Matthews of WB Yeats' 'Down by the Salley Gardens.'

All shortlisted poets are included in the 24th annual Forward Book of Poetry, which also contains 50 poems highly recommended by the judges.

The Forward prizes were set up in 1992 to celebrate excellence in poetry by philanthropist William Sieghart, who was on the stage last night to open and close the evening, thanking both poets and audience for their presence at the Royal Festival Hall, the first time the Forward prizegiving has been held in the main auditorium.