The Best of a Bad Situation: Jamie Thrasivoulou, Silhouette Press 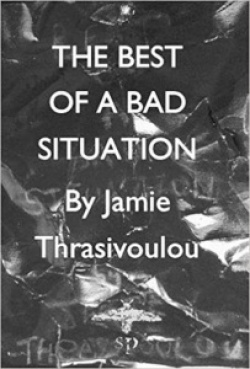 In performance Jamie Thrasivoulou has a sten gun delivery. It is the rhythmical bang, bang, bang of the best of ranters’ performance poetry, laying audiences to waste with a voice that is described as “vital, visceral, angry and urgent” by Matt Abbott on the back of The Best of a Bad Situation (Silhouette Press, 2017).

In a second quote about the collection, another performance poet, Andy Mulletproof Graves, claims: “These are not poems but caged animals snarling at the bars; this is less a collection, more a declaration of war.”  Certainly anybody who has seen Thrasivoulou perform, and he does so across the country, will be inclined to agree with the aggressive and angry labels.

Thrasivoulou is a poet of the streets and the inner cities, and never tones it down, whether he is on the bill at a poetry festival or delivering to a crowd of 25,000 at Derby County’s Pride Park when the Rams play a home game. He isn’t afraid to take poetry to the people, and out of its open-mic comfort zone where poets often perform to poets who hold similar views to their own.

If you’ve enjoyed Thrasivoulou in performance you will not be disappointed in the collection.  As you read you can hear his distinct Derbyshire voice at the heart of them.

So, is The Best of a Bad Situation merely shouty poetry, telling in a direct way how it is for the working classes?  Is it all, it’s grim up north - or indeed, in the industrial Midlands? There is, and rightly so, some of that. There are elements of, Oi, you…look at me…this is how I feel:

Distinctly working-class every day of my life

Even when I educated myself despite your advice

So what now, now I gotta’ degree?

Particularly, when your postcode begins D-E

But there is also much, much more than that happening in this collection.  There is, for example, consummate storytelling such as in the four-part central piece, from which the collection takes its name, and in the beautifully titled ‘Hunting Snow in a Blizzard’ where we are treated to a day in the life of a candle-pinching shoplifter. The tale of ‘Steve Slash and the RDT’, about random drugs tests, is equally entertaining and well handled:

I tell him: fillit fuller piss ‘n’ I’ll forever hold you in the highest:

I’ve already taken the Johnny from the cup and placed it down my sock.

There is perhaps something of the contemporary balladeer in Thrasivoulou’s best pieces. Stories of the working everyman, and indeed non-working everyman.

Thrasivoulou also has a keen ear for dialogue, dialect, and patois.  As in this example where he renders the voice of Weston, a character keen to explore the question of cleverness.

It’s not just Thrasivoulou’s ear that works. He also has a keen eye, and his observations are at once brutal and beautiful, as in ‘Anywhere Street, DE1’

The same place where habitual whine-drinkers

With their brothers and sisters

There is dark comedy here too.  ‘Dead Letters’ tells the story of a missing postbox.  The reader believes the story to be told, but a few pages later ‘About That Postbox …’ appears with its perfectly timed call-back to the previous poem, handled deftly with the cool swagger of the stand-up comedian.

This collection does work on more than one level. They aren’t just angry words. As Helen Mort says, the poems also make the reader “take a long, hard look around”. It is a book that keeps on giving, and if you really want to know what’s happening in the underbelly of this country then read him and other working class poets like him.  Thrasivoulou’s star is rising. Go and watch him.  And then buy this book.

Emma Purshouse is a freelance writer, performance poet, and comedian. She has published poetry for adults and children. Her most recent collection is Close (Offa’s Press, 2018)

Jamie Thrasivoulou, The Best of a Bad Situation, Silhouette Press, £6

'Haiku: Robin at New Year' by David Redfield is Poem of the Week ►