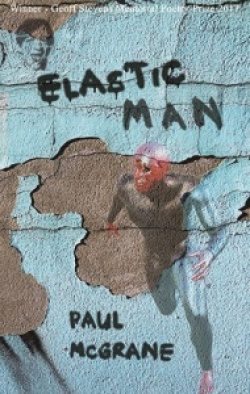 Paul McGrane’s debut collection is an enjoyable glimpse into the mind of a man whose tastes, formed in the last decades of the 20th century, will chime with those of many readers today. His title acknowledges a debt to Mark E Smith of The Fall, the punk band first formed as The Outsiders in the 1970s, whose glory years were in the late 80s but whose music spanned 40 years. They named themselves after novels by Albert Camus. Perhaps it’s a fanciful idea but there is something of Camus’ cool but compassionate view of the plight of the ordinary citizen in some of these poems.

McGrane approaches social and political issues with a sharp eye for ironic parallels, as in ‘Toy Story’. Here the iconic film animation for children and collectable Victorian lead soldiers are the springboard for a meditation on the futility of warfare and the passing of the British empire. The definition of an army as “made for the pleasure of others” shocks and surprises from the beginning. The images of children playing at war, with soldiers

for a child’s version of war

Some of us got to drive big cars

are juxtaposed with the reality of death: those cherished toys, like their real counterparts, have been "‘broken trampled lost / mangled and flung to the flame."

In ‘Harbinger’ McGrane approaches the issue of global warming with a kind of philosophical sang-froid, without in any way denigrating the seriousness of its implications. He’s writing from the future, when “the gates were off their hinges” and "summer brought first fruit fall, abandoned beaches, / storms with names that came crashing through the alphabet," and bathetically remarks that "Someone should have asked what the fuck was going on, / marching with a bedsheet for a banner."

Several poems are about individuals, strangers and lovers. ‘The bomb that will bring us together’ riffs directly off a song by The Smiths. McGrane’s poem is a love song about breaking through shyness, bypassing declarations of intent, to find “the joy of surrender and the loss of control / as we were lost, with help from alcohol “.

The humour in this collection is tinged with wistfulness. In ‘poem in which I meet denis norden’ we meet a narrator who has found a way to be important:

though in fact he had only been in a queue at the bank with a man who was “almost certainly norden”, he couldn’t recall what he had said or done, the bank was gone now and nobody now knew who Denis Norden was!

In ‘Regret’, another poem about a supposed meeting with a celebrity, the narrator’s partner, “long before I said I’d never loved you”, approaches a woman in a shop where they’re “staring at the furniture … cuddle drunk” and, believing she is the singer, Sade, talks to her consolingly about having failed to record a hit since the 1980s. We never learn whether this is a case of mistaken identity or not, because the narrator isn’t listening but has wandered off to the Mirrors department and is looking at his reflection, “wondering if my eyebrows /could be closer together”. As a poem about a relationship, this is hard to beat for subtlety.

This is the ordinary man in the street given a voice. He’s kind, flawed (as in the poem ‘Stop’, in which the narrator neglects to help a stranger), socialist with a small ‘s’, concerned with fairness and equality, worried about the big issues without feeling able to influence them easily, and anxious about the motives of those who can.

These poems, joint winner of the publisher’s 2017 Geoff Stevens Memorial Prize, are well-crafted, not a word wasted. Their direct language is deceptive: their subtlety hides messages in full sight. This is a very readable, enjoyable collection.

◄ Hippocrates prize for poetry with medical theme is open for entries

Seeking inspiration? Christina Rossetti and a tiger might help ►