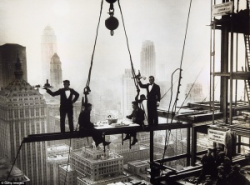 The Waldorf was always Grandad’s hotel –

the place he had helped to build but never

got to stay in. From his room in the Bronx,

did he hop on the El to leave his mark

to check the details, as I try at least

to plot his absent years back from the splash

of its opening to the Wall Street Crash.

Working out his children’s ages, a gap’s

revealed, and then how old he must have been –

a Volunteer with mouths to feed, his goal

something better than the Irish Free State.

His cause in abeyance, he chanced his luck

abroad, where he found the future rooted

in its bottom line. He returned with cash

But what did he make of bootleg whisky,

when he had no chance of a quiet pint;

or the well-dressed hoodlums and shoeshine boys

who had never crossed fields or dug a ditch?

Above his head the sky’s a chart, criss-crossed

with girders, on one of which two workers

have started tucking in. A step away,

two waiters hover whose aim it is to please.

A beautifully turned poem with craft and craftiness, bringing the past to bear on the future. A whole agenda of immigration and its expectations and frustrations are lovingly presented. It's interesting to note that the Waldorf also has its history in the Strand. Lovely to read your work here David!

A timeless observation on how the individual can be a valuable part
of a larger world. I can easily imagine a Roman road worker here
in Britain stepping back to admire his handiwork while gazing at the
straight as an arrow highway he had helped put down...even as the
mist swirled down out of the hills. Those New York workers who
sat on dangling girders eating their sandwiches hundreds of feet
above the teeming city streets gave as much to progress as any
architect or planner.