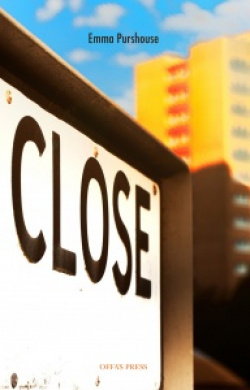 The endorsements on the back cover of the book were the first things that struck me about this collection. Instead of the customary kind words from her poetry peers, performance poet Emma Purshouse, in her first full collection for Offa’s Press, is praised by a postal worker, a herbalist and live-aboard boater, and a council worker. The latter says: “Close is close up in every way possible, close to the locals, close to people and language, close to public transport, and extremely close to the nitty gritty of life.”

Some of the poems in Close have been previously published in other collections. The superb ‘Flamingos in Dudley Zoo’, for instance, has appeared in two anthologies. But here Purshouse has rehoused these poems, and linked them, with others, to different characters in an imaginary street.

The aforementioned Flamingos, a dialect poem that casts a cold eye on working-class opportunity, are now conjured up by the woman at number 24 after watching her grandson in his paddling pool:  “I shut my beak. I keep it zipped. / He doh know our wings am clipped.”

The weather reminds the retired ice cream man at number 21 (I won’t keep listing the addresses, but you get the idea) of the ‘Summer of 76’, and carries deeply disturbing memories beneath the chimes awaiting the children outside the school gates:

Hey, girl! You want juice with that? The generator

Shut it! He shouts to block it out. We’ve all got needs.

‘Why children’s librarians shouldn’t work alone’ conjures up fairy tale fantasies among the deserted, mid-term shelves, as a lonely librarian finds herself eyeing the apple in her lunch box with suspicion after finding time to re-read Snow White. Even when danger apparently lurks the tone of the poetry is often high-spirited, as in the four-line ‘Thoughts as Kevin from next door invites me into show me his 5ft long scale model of the Mary Rose’ (the title contains more words than the poem): “How many matchsticks? / How much glue? / How long a stretch in nick/ did this bloke do?”

A candle looks back with nostalgia to the 1970s and the Winter of Discontent, and a canal warns in Black Country dialect and local expressions of its dark side: “Doh say as how / yow ay bin towud / to stay off my shiny bits / an’ kep aht the oss rownd.”

‘Art school annual picnic’ abounds with jokes and rhymes about painters, some obvious, others less so, and will be well received at spoken word performances. ‘Moses’ is altogether more serious, a touching and warm poem about the UK’s Kafkaesque world of immigration controls and unpredictable officialdom acting without rhyme or reason.

There are laugh-out-loud poems such as ‘Glut reaction’ – “She’s coming! She’s bringing courgettes”, poignant offerings such as ‘Have you thought about a name?’, and poems where jokey and clever wordplay is mixed with more profound truths, such as in ‘When he left’.

Emma Purshouse may not worry too much about the opinions of a common-or-garden poetry reviewer such as myself – why should she, when she has already received those endorsements from Helen, Kit and Kuli? – but for what it’s worth, I think her humour, high spirits, imagination and insights are reminiscent of Liverpool poets McGough, Patten and Henri, and maybe deserve the same popular recognition. Instead of the Mersey Sound, here’s a refreshing and original voice from a sometimes fantastic Black Country - a place where it's perfectly possible to spot a 'Mermaid on the number 3 bus'.

Seeing the wood and the trees: chance to become writer-in-residence with Forestry Commission ►

Having read this book, I have to say I agree wholeheartedly with this review. 'Moses' is a gem of a poem, taking the unpromising subject of Home Office treatment of asylum seekers and creating a beautifully observed, delicately handled, personal tale. The rest of the book is just as good. A superb collection.