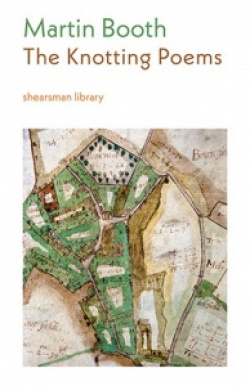 Here’s a name I haven’t heard for some time. When he died in 2004 he had become a relatively well-known novelist at least one of whose books had been nominated for the Booker. Nowadays, it is pretty much forgotten that he started as a poet, even writing a book about it called Driving Through The Barricades.

These poems are even more obscure, as they were only published in America by a small publisher in limited editions. Tony Frazer’s afterword to the collection details how he knew the publisher and was given the two chapbooks that constitute The Knotting Poems. So now, in 2018, he publishes them almost as a new collection.

This preamble is interesting, but what of the poems? Firstly, they are all set in a tiny village somewhere in Anglo-Saxon England, in some way connected with King Cnut (or some entirely unknown laird called Cnot). They are written in a style much more associated with American Objectivist poets such as Cid Corman, George Oppen and Larry Eigner. One example will suffice to show what I mean:

lover of the sun

Imagistic and precise, these poems nevertheless manage to both evoke the Anglo-Saxon world of Cnot and the modern world, to describe the rural and to make journeys to cities like Chicago. Cnot in this collection is a kind of time traveller, but the poem’s real theme seems to me to do with obscurity. Knotting, a hamlet in the middle of nowhere, is very obscure; and Martin Booth himself never achieved the fame he perhaps deserved. Cnot himself is a marginal figure.

This obsession with the marginal and the almost forgotten makes the poems both interesting and strangely moving. Cnot, the farmer, the Anglo-Saxon, at one stage enters a recording studio:

sense: as Aristotle once

art is beyond and

said, we can live on

Sometimes I wonder about whether all the line endings work, or the images were entirely fresh, and it perhaps shows a minor poet at the height of his powers, as good as he ever could be. But this is an interesting collection that I enjoyed reading. Shearsman are to be commended for bringing this collection to light.