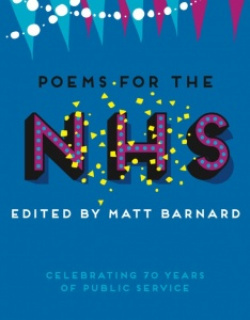 Anthologies seem to be coming out thick and fast these days, often supporting the best of causes. Although it’s not possible to review them all, or even report their publication, here is one that certainly deserves a second glance, and not just because of its subject’s closeness to the nation’s heart. It’s the quality of the poems therein, too.

Poet and editor Matt Barnard adds a rider in his foreword to Poems for the NHS, published to mark its 70th anniversary, that it is “almost inevitable that such a huge institution that receives an enormous amount of public funding, will develop its own culture, language and ways of working. These can baffle the outsider, and at its worst, the NHS that forgets the importance of the individuals within it and sometimes closes ranks against them.”

But he goes on to say that the “overriding spirit of the anthology is one of celebration”, and that is what I find in it, too. Carole Bromley’s moving and uplifting poem ‘On hearing for the first time’ is worth quoting at some length:

or the sea or the stars,

and coming out into the light,

the sun on your face.

Afterwards she walks by the Tyne,

the birdsong, the traffic, the ship’s hooter

will be too much. They are not.

There’s the comradeship of patients, observed by Rachel Burns in ‘The Waiting Game’:  “The nurse calls my name / the old man adjusts his cap. / Take care pet/ Take care pet.” Keith Chandler pays tribute to ‘The Chemo Nurse,’, keeping spirits up in “this palace of fake cheerfulness”; Claire Collison acknowledges the company of another nurse who sits with a cancer patient and who “hadn’t lunch or much sleep for a week” (‘Keeping Borzoi’); and there’s Helen Fletcher’s matter-of-factness at a hospital café: “Sometimes doctors come into the café bloody. / We’re told not to serve surgeons if they’re still in scrubs, but I serve them; / the doctors are so busy, they need to be kept going.”

Many users of the NHS feel a bond and empathy with those working for it. Another nurse is seen by Amanda Higgins with “one hand pressed against her forehead, / and the other against the wall”:

At dawn, I drove past quiet houses, dark, still filled with sleep,

stopped abruptly at a red light even though I was alone.

And as I waited I glimpsed a single bright lamp

in an upstairs room,

and wanted it to be her, safely home from her shift.

(‘The Weight of Everything’)

Bernadette Lynch’s ‘Nye’s Ark’ attempts to list many of the components that have made up the National Health Service since it was launched by Labour’s health minister Aneurin Bevan in 1948, and also to capture some of the  fervour and belief that surrounds this national institution:

Bring on the chaplains and almoners, porters and chefs,

and the Filipina nurse who misses her children.

Load up the volunteers and visitors, the surgeons

and the families who keep vigil in the night.

I have found you righteous in this generation.

Mel Pryor is distracted by an ‘Orthopaedic Surgeon’, “the way he took her eye with a medic’s level appraisal / that stripped her zippered dress, her tights, her flesh”; there is evocative and hallucinatory poetry in Jude Rosen’s ‘Crohn heroine’; Myra Schneider enjoys a hospital bath, amid a feeling of returning to infancy: “As Kindness / babies my back with a pink flannel // I’m reborn though maimed, ageing.” (‘Bath’); Matthew Paul’s stubbly dad puts up with a hospital shave (‘On Muybridge Ward’).

There is a hint of NHS officialdom, which Matt Barnard alludes to his foreword, in the almost unbearably poignant ‘Pronunciation Lessons in the Labour Ward’, by Al McClimens, which begins: “Another D.O.A to clerk. The G / is soft, she tells them, like geranium.” It concludes:

And baby George? Mum has the Polaroid

the nurses took. It’s all she has. He’s dead

and buried in her mind. People avoid

her gaze. She can’t remember what was said

two minutes since. The G is hard. Her son,

Roy Marshall is a former nurse who worked in cardiology, coronary care, and renal research. He contributes a poem called ‘Student’, about preparing a body for the mortuary with care and respect, “the finished parcel of taped sheets / something to be proud of.” I can relate to this. As a volunteer porter at my local hospital for a couple of years, I and a colleague occasionally had to collect the deceased from a hospital ward, cover them up further, and wheel them through the corridors to where they were picked up by the mortuary van. I did this portering job for just one morning a week before going in to work at my “real job”. I gave it up on the pretext of a bad back, but really because of the fear that I might one day make a fatal mistake. (On one occasion I almost did). Most of my fellow porters were foreign, and were of course paid a fraction of the wages I received up in London, yet bore the responsibility of collecting the correct blood for patients, and filling in a surprising amount of death documentation at the mortuary, among many other things.

Despite such behind-the-scenes realities, love and affection for the NHS unites our country in a way that religion no longer can, with the exception of those enemies within still working away to undermine it and other institutions of the UK. Despite their best efforts, most people generally maintain a patriotic pride in the NHS, and for that reason this anthology of poems from the cradle to the grave should have almost universal appeal. It is also a timely reminder of what is at stake.

Poems for the NHS, edited by Matt Barnard, Onslaught Press, £10

◄ Poetry and the Affirmation of Life

American Life in Poetry: The Girl From Panama ►

Thank you for the ISBN relating to this promotion/review.
I know only too well about incorrect or missing information having
submitted a published novel with all the appropriate information to
a magazine column for review purposes - only to realise upon
reading the resulting review that the ISBN shown was not the one I had supplied.
Cheers.
MC

Do you have the ISBN for this book? Handy for an online order.
MC

There should be a copy of this in every NHS waiting room.
Another great review, Greg.

Hope it arrives. I'm sure you'll enjoy it, MC.

An emotive and surely deserving area of appraisal, admiration and affection. Thanks for this - now added to my list of "asks" for this
Christmas.