American Life in Poetry: Here and There

by Ted Koosner - US Poet Laureate 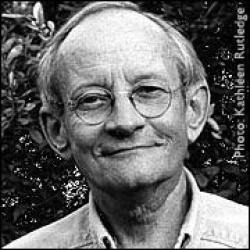 Do others of you think about what you'll miss when you leave this life? For me it will be the great skies over my part of the world. Here's Emily Grosholz's take on this, from her new book The Stars of Earth: New and Selected Poems, from Word Galaxy Press. She lives and teaches in Pennsylvania.

What will I miss when I'm gone?
The squeak of the wheelbarrow's wheel,
Grace note that strikes with every slow
Revolution, and then the hushed, rusty
Answer in triplets from the invisible
Bird in the lackluster maples.

Daylilies my mother liked to set
Roadside in June. Pale Greek anemones
She never traveled far enough
To find wild, as I did once or twice, but
Maybe I'll bring her some, if over there
Windflowers blow beside a cloudy sea.

We do not accept unsolicited submissions. American Life in Poetry is made possible by The Poetry Foundation (www.poetryfoundation.org), publisher of Poetry magazine. It is also supported by the Department of English at the University of Nebraska-Lincoln. Poem copyright ©2017 by Emily Grosholz, "Here and There (from "June"), from The Stars of Earth: New and Selected Poems, (Word Galaxy Press, 2017). Poem reprinted by permission of Emily Grosholz and the publisher. Introduction copyright © 2018 by The Poetry Foundation. The introduction's author, Ted Kooser, served as United States Poet Laureate Consultant in Poetry to the Library of Congress from 2004-2006.

Ted Kooser was born in Ames, Iowa, in 1939. He received his B.A. from Iowa State and his M.A. in English from the University of Nebraska-Lincoln.  His many honors include two NEA fellowships in poetry, a Pushcart Prize, the Stanley Kunitz Prize from Columbia, the Boatwright Prize from Shenandoah, the Pulitzer Prize, and an appointment as U. S. Poet Laureate.

These entries from across the pond are always welcome,
with their added insight and variations on themes we are
familiar with in our lives.
This enquiry must resonate with many folk, whatever their ages, but obviously more so with older people. Responses
would surely be worth an anthology on its own! For me,
as a long-time resident of London, my thoughts would
probably include affectionate references to life in this
great historical city, recalling the observation (attributed to
Dr Johnson?) that those tired of London must be tired of life.