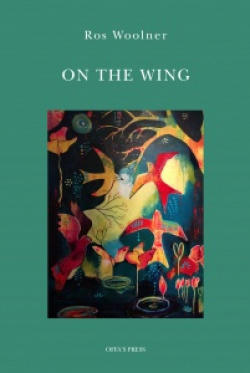 Ros Woolner lives in Wolverhampton with her partner and two teenage children. Her poem ‘Sack of Night’ came second in the inaugural Wolverhampton literature festival competition. She works as a translator and is a member of Cannon Poets, Bilston Writers and Blakenhall Writers.

Variety is the spice of this collection. In its pages readers will find a woman spinning plates, someone shaking drops of dew from a washing line, a bird falling down a chimney, a woman called Lexa who is out on a mission to rescue words and a romantic optometrist who spends his free time sizing up restaurants according to their lighting arrangements for the perfect date.

The collection opens with ‘Millicent,’ the woman who spins plates. Woolner elevates her to the status of a goddess because what she does is “really no different / from spinning planets.” She is so adept at what she does that all women should take a leaf out of her book. Woolner makes it sound so easy: “It’s all about timing, / endurance, inertia. / Her feet barely move.”

That word “inertia” stands out.  It is not what we would expect here. Millicent is the still centre of her universe.

Woolner is good at catching us out. The poem titled ‘As if’ suggests a throwaway line of little or no importance, something equivalent to ‘in your dreams’, and yet it belies the moving nature of its content. The three stanzas are beautifully crafted into morning, afternoon and evening sequences where the fragility of a relationship is expressed in terms of what the speaker sees and interprets and a metaphor introduced by the phrase ‘as if’ at the end of each section that neatly encapsulates the mood.

There is much to admire in this collection. ‘No Skateboarding in Heaven,’ the sonnet ‘Sons and Roses’ (surely an echo of Guns and Roses as well as a nod to Shakespeare’s Sonnet XVIII), ‘Lexa,’ the sonnet ‘Writing on the Line,’ (where the first line echoes the opening line of Milton’s sonnet ‘On His Blindness’) ‘Words on the Wing’ and ‘Horatia’ are all examples of Woolner at her very best.

It is not just the opening line of ‘Writing on the Line’ that draws us to think of Milton. Woolner wants us to see how the word ‘writing’ has been taken over by the word ‘washing’ or is at least in competition with it. Just as Milton expressed his frustration at his blindness, so Woolner expresses her frustration about having to do the daily chores.  The poem could just as easily have been titled ‘Washing on the Line’ but Woolner is also using the phrase ‘on the line’ to mean that there is a risk that time for writing and the appreciation of literature may be lost.

I wonder then, in this enlightened age,

what’s prompting me to take more time and care

of skirts and trousers than the written page,

why literature gives way to underwear.

I know this shirt goes out Mondays at nine.

Indeed – if I swap rhyme for washing line,

I can’t help thinking that Millicent, with her careful control of work / life balance would have come up with the perfect solution.

Woolner’s carefully-crafted poems are full of entertaining, eccentric characters that stretch our imagination “like chewing gum”. She achieves this with effortless ease, writing ‘on the wing.’ Recommended.

◄ Festival Set To Light Up Bolton This Autumn