Festival Set To Light Up Bolton This Autumn 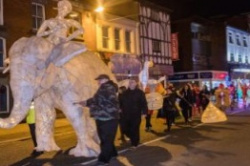 Communities across Bolton will help make the town shine when the inaugural Bolton Light Festival begins later this month.  The festival is a new event for the town and has been developed from the lantern parade that formed part of the Bolton Christmas lights switch-on last year.

It will see a series of light-themed performances take place across the town, starting on October 18 with events to mark the Hindu festivals of Dashehra and Diwali, and culminating in the Christmas lights switch-on lantern parade on November 22.  Other events include a spectacular light display projected onto Bolton Town Hall on November 16 and 17, funded by Bolton at Home. This event will mark the 21st anniversary of Bolton at Home’s Percent for Art initiative which has championed arts and creativity in the borough.

As part of the festival, 10 community groups from across Bolton will each put on their own light-themed arts performances after Bolton Light Festival organisers helped them secure Greater Manchester Combined Authority (GMCA) arts funding.  Gaynor Cox, housing arts officer at Bolton at Home, said: “The Bolton Light Festival will be a celebration that involves as many people as possible from communities right across the town. It’s about bringing people together and promoting Bolton as a unique destination.

People from across the borough will be lighting up the town in a variety of creative ways, including dance, drama, film, music and poetry.  Bolton Council Leader and Greater Manchester Combined Authority lead for culture, Cllr Linda Thomas, said: “As the nights get longer, I am sure the inaugural Bolton Light Festival will brighten up everyone’s winter as communities come together for a series of unique and enjoyable events. The festival is a great opportunity for everyone across Bolton to explore their creative side and get involved with the arts.”

◄ "We Should Do This!": A Journey into Poetry

Festival news » Peace in our broken world at Stratford-upon-Avon