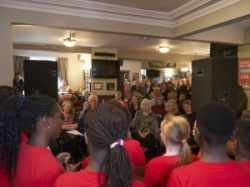 THE drive over to Marsden from my home in Stockport can be glorious but this year it was a louring, drenching trip ending in a flooded car park and a soggy walk to the Railway Inn for this year’s poetry jam. But the mood lightened at once in the warm embrace of poets local and visiting and the welcoming words of MC Julian Jordon.

Can you believe this was the 9th jam associated with the final day of the Marsden Jazz Festival? And it might have been a dank morning but it was a packed house – as usual – and as we were reminded of the wonders od the writeoutloud poetry website, I settled myself next to a shelf of poetry books (for sharing as Part of the Poetry Village project) and we were off.

Carolyn Garland was the brave soul who opened the session with an acknowledgement of World Poetry Day and a plea to tackle climate change as part of personal renewal  and reinvention.  On a lighter note ‘Oh Which Diet?’ evoked mutterings of recognition from the adiposely-challenged among us.

Sarah L. Dixon’s ‘In The Witch’s Pantry’ was atmospheric but ‘And Still I Don’t Know’ was an amusing list of personal puzzlements – including knots, rules of chess and rugby scores, why fell runners don’t break their ankles more often and so on. Funny, witty and clever.

Alan Prout’s ‘In The President’s Trash Can’ touched many a nerve with an imaginary rummage through the rubbish (would that be Trump’s bin do you think?) finding the wisdom of Hawkins, Angelou, Montaigne  and Seneca tossed aside and civility and forgiveness buried at the bottom. As Julian Jordon remarked more than once, we need more political poems’. Yes we do.

Sisters Jackie Hales and Bonnie Meekums hit us with a double whammy of thoughts about children living overseas with Jackie’s ‘Arrivals’ and Bonnie’s ‘We’re Back To Normal Here’ touching reminders of the tugs on the heart when family come and go.

Tony Hargreaves’ ‘An Autumn Day’ was a perfect choice for the occasion but his ‘Black Fossils In The Hills’ inspired by the life and death of cloth manufacturing in the local area was a tremendous piece of observational writing.

Malcolm Jones read a poem for a late friend who enjoyed the jazz festival with him for years ‘If Ever We Are To Meet Again’ which packed a powerful emotional punch. Then in a swift about turn he raised many laughs with ‘Never Kiss A Bank Clerk’ with its dire warnings about the millions of banknotes counted with spittle-flecked finger . You could be kissing ‘someone who licked every pound in your purse’. Yuk.

I think Keith Jenkinson came up with my favourite of the morning about skulking in the early hours and seeing foxes and bats and eventually finding ‘a pack of lies’.  Other people snaffled them up including politicians, sales reps and used-car salesman. Someone took three sackfuls and gave them to the Daily Mail. And the author  took some too and hid them in a drawer only to find they had multiplied so he used them on his CV … genius.

Rob Baylis’ ‘Error Messages’ touched a nerve with everyone who has ever had one on everything from a computer screen to the washing machine and his reference to the ‘wild world web’  was on the button.

Nick Broadbent, a stalwart of the Marsden Write Out Loud  group read a touching poem about his late father’s connections with the countryside and a resting place for his ashes, while Stan Sagan pondered the contrast between the outdoors and a shopping centre prompted by a shopping trip with his daughter.

David Makin read a Henry Normal poem about the female orgasm which contrasted sharply with a Thomas Hardy meditation on war for the Armistice.

Kathy Trout’s poetic memories in ‘Bournville 1973’ were fine but she reduced herself and the rest of us to tears with ‘Value For Money’ tracing the life of a dog from designer pooch  to rescue pet through the echoing refrain ‘The day you gave me up a lot of money changed hands’ and ending ‘The day I died you said I was priceless’. Gulp. I wasn’t surprised to find out later that Kathy is the founder of West Yorkshire Dog Rescue.

Julian’s granddaughter Niamh kept up the family tradition with a lovely reading of Richard Edwards’  ‘The Word Party’. Julian also welcomed children from Lily Lane Primary School in Manchester who are fast turning into the next generation of poets with their thoughts on the power of words and blowing your own trumpet. And with two of the children called Precious and Success you can’t help feeling poetry is in safe hands.

Jo Murphy’s ‘Bi-polar Bear’ was another poem to touch on climate change and human threats to the planet but ‘Lehman Brothers’ tackled the 10th anniversary of the bankers’ crash musing on ‘our croupier leaders’ ‘ in a stupour fixated on the lucre’ and ‘conjuring money from their computer’. Rosie Wilkinson’s  ‘Our Life In Gardens’ was a charming evocation of a family’s growth in parallel with the expansion from bacony pots to ‘an Eden in a ragged field’.

What was especially good to see was the turnout of poets from the various writeoutloud groups in the region – Stockport, New Mills, Sowerby Bridge, Calder Valley. Martin Elder with memories of youth and a love poem to his ‘poetry widow’ wife. Nigel Astell with a tale of how shops begged to have poems in their windows after initial doubts. Freda Davis with a ‘teabag haiku’ and a tribute to West Yorkshire poets. Tim Taylor and his Christmas Card Friends. Ann Broadbent’s plea for the NHS – ‘frail in its 70th year’. Thea Ayres’ brave reading of ‘Duet’ about transgenderism.  Jam favourite Felix Owusu-0Kwarteng with ‘Nessie’ and then the startling ‘Burn’ with its bellowing refrain ‘remember, REMEMBER, REMEMBER’ with echoes of Grenfell Tower.

New reader Kitty Diffley startled with her piece ‘Footsteps’ written from the point of view of a stalker – ‘my name escapes you but nothing of you escapes me. I press my foot on your footsteps’. I thought that was an extraordinary poem. Laura Potts (writeoutloud gig guide editor) has been doing projects with Radio 3 and ‘The Nightwatchman’ and ‘After Emmeline’ showed off her talents to perfection. Michael Holding demonstrated how inspiration is everywhere – ‘Tale of Tools And Teamwork’ was written for a young girl with a ring stuck on her finger.

And that was it, all over much too soon after thanks to hosts Liam and Amy. So next year will be the 10th anniversary. Party time Julian?

Prose, Poem, or Prose-Poem? Does it Matter? ►

Sounds as great as ever, Jude, with the usual, wonderful wealth of poetry. Sorry I had to miss it, but thanks for a report that perfectly captures what makes it so special.

Bread and butter
crackers and cheese

Marsden and music
Village and festival

Drinkers and poets
bitter and mild

Jam and jazz
a perfect match!