So Many Highlights at the Winchester Poetry Festival 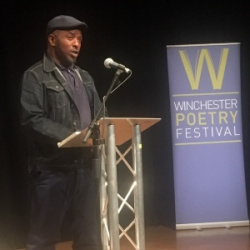 The third Winchester Poetry Festival drew to a close yesterday with founding trustee and Festival Chair Stephen Boyce thanking and paying tribute in suitable fashion to the staff and volunteers who made events run so smoothly, to the poets and speakers who had made for such a thrilling weekend, and to the enthusiastic audiences who, it has to be noted, really had flocked to Winchester and had made the festival such a joyous success.

I was fortunate enough to spend one entire day immersed in Winchester’s world of words, getting as I did quite comfortable in the superbly apportioned Performance Hall at the city’s Discovery Centre where the comfort, acoustics, lighting, sound and aesthetic are all delightful.  Even the coffee is good, and I parked right outside for free too.

The lunchtime event I attended was entitled So Beautiful it Must be True, a lovely and accurate if somewhat tenuously connected epithet to proceedings, which kicked off with Nick Makoha’s (pictured) rich, dramatic poetry from his new collection Kingdom of Gravity, based on experiences from his native Uganda but cathartically written so Makoha could “stop being embarrassed about being Ugandan in an English space”.  With characteristic Englishness he managed to apologise to the audience; “I’m sorry there’s no happy poems” he grinned, softening the blow of the visceral Resurrection Man or the chilling Watchmen.  Next up Katherine Towers delivered a stunningly beautiful set of poetry ranging from the philosophical Boethius Imagines the Desert to the deeply personal Bluebells and Daisies family poetry she wrote for her daughters.  Karen McCarthy Woolf closed the event with her simple yet cuttingly insightful work and charismatic delivery.  “Even a frayed rope can tether a boat” came from her lilting Seasonal Disturbances collection about the stillbirth of her son some years ago, and she too found great humour with the audience, offering them a choice of poem to close with; ”Do you want a poem about happiness, or one about locusts?” she asked, before delivering one about happiness and locusts.

The Robert Hutchison Lecture, newly named to honour the memory of the founder of the Winchester Poetry Festival who sadly died last year, was delivered with gusto and aplomb by the fascinating Professor Alexandra Harris who went to some lengths both entertaining and factual to endorse the view of 18th century poet William Cowper that even the most humdrum facets of English life and countryside were to be celebrated.  “There is nothing minor about local knowledge” she extoled, asking what we can learn from local visionaries like Cowper and the painter Stanley Spencer.

A festival highlight among highlights was the fast-paced Mouthful of Stars, opened by the inimitable Luke Kennard who was unphased by unusual audience banter (“Show us your creases!”) and took us on a lightning tour through some of his brilliantly dense but perfectly phrased and largely self-effacing poetry, including the nodding dogs of A.I., the “Nation of idiots” summarised in Filter, and the audacity of the hilarious Luke Kennard: “This one contains the words ‘Luke’ and ‘Kennard’ quite a lot”.  Following him came the glorious Siddharta Bose whose storytelling poetry took us from the LDN of London to the Black Goddess of Kolkata and so many places in between, combining his compellingly breathless and quavering delivery with a confident and deep resonance that empowered his words and sent shivers of reality down the spine.  Then behind Bose came the supreme confidence and cleverness of Caroline Bird, “I don’t think you can do poetry unless you enjoy making people feel deeply uncomfortable” she said, and stayed true to this with poems like the unapologetically honest Megan Married Herself and Dive Bar, giving true poetic voice to the centre-left cynicism of middle-England.

The brilliantly programmed final event of the festival was the slight, unobtrusive, everyday T-shirted presence of Hollie McNish, who brought the house down as expected. She was hilarious, endearing and of course, a bit rude, and I will be publishing a full interview with her along with a review of her Winchester performance in the next few days. “Thanks for listening to me twatting on all night” she said amid the closing applause.  You’re welcome Hollie, thanks to you for doing the twatting.

The Winchester Poetry Festival is held every two years.  2018 looks to have been a resounding success so we really can look forward to 2020 with excitement.  The Winchester Poetry Prize, it should be noted, is an annual event, and was this year won by Inua Ellams for his poem Plight/Fantasy, which you can read in the winning Winchester Poetry Collection entitled The Blaze in Father’s Breath.

◄ Poetry & The Great War, a series: 3 The Battle of the Somme