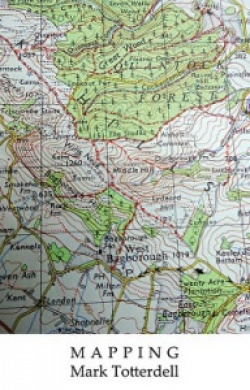 One of the pleasurable tasks I was invited to undertake at my secondary school – one of the few, to be honest – was to devise an Ordnance Survey map from my own imagination, complete with all the necessary colours and symbols. There was no deadline, and I laboured with love over it. It left me with a lifetime’s fascination for maps, and for the secrets that they can reveal from careful study.

I would guess that Mark Totterdell is also a connoisseur of such pleasures, because his current collection Mapping includes 49 short poems about individual OS sheet maps, complete with numbers and titles, ranging from ‘202 – Land’s End and The Lizard’ to ‘3- Shetland North Mainland’. He has cycled, hitched and walked through the areas, and he might well have been wearing an anorak as protection against the weather at least some of the time.

Good for him! These verses are a delight that help you feel better about your country. As befitting a poet who hails from the west, there’s a nod to Thomas Hardy and the ghosts of Wessex literature in ‘194 – Dorchester and Weymouth’:

He cycled past great swells of threadbare turf,

crossed the paths of those who’d lived whole lives on paper.

But hitching your way around the country can be unpredictable. Totterdell finds himself on ’52 - Aberfeldy and Glen Almond’ thanks to “twelve strangers kindnesses … seventeen sheets from where he should have been”.

On a ride in ‘176 – West London’ his bus is diverted away from “the jag of shopfronts. The pillar of smoke”. You think of Grenfell tower, or riots. Totterdell does not linger in the big city, although things are not much better in the Midlands, land of motorways, where he finds himself longing for places “free of blue roads, whole green realms of romance”. (‘140 – Leicester, Coventry and Rugby’).

Sometimes you cannot help but smile. Walking near the “knuckles” of the North York Moors, Totterdell falls “and stains this map with fine rich mud / which to this day obscures the coastline north of Whitby”. (‘94 – Whitby and surrounding area’). My mind was irresistibly drawn to an old Monty Python sketch starring Michael Palin about an accident-prone cycling tour of the west country that unaccountably ends up in Moscow. But Totterdelll never wanders that far. His furthest point west is ‘202 – Land’s End and The Lizard’, with these poignant four lines:

They walked west all the long-lived day, loving the fizz

and blaze of summer, guiding the one who’d taught them maps,

the one who, at the clifftop tourist trap,

I think that Mark Totterdell must have taken a particular interest in the ‘PH’ symbol on OS maps, for there is a separate section in his collection on the subject of pubs. In ‘The Seven Stars’,

The ghosts of a million cigarettes

Are trapped in its walls and ceilings,

While constellated around the bar,

The locals plough on and on

and on, exhaling their age-smoked thoughts,

He extols pub food in ‘The Warren House’, a Dartmoor inn, and in particular rabbit pie. Vegetarians, look away now: “Tuck into the flaky pastry, the gamey flesh, / that piquant sauce of dissonance and guilt pangs, / the sharpness of those painfully small bones.” And in ‘The Welcome’, the poet, like many pubgoers, reveals a conservative antipathy to change:

Stools and low tables. Was it really gaslit?

retrieving three-minute memories from the deep

deep past. It’s a café now, all bright

and nice with cakes and pine, stripped of its spirit,

The collection is completed with a section on flora and fauna, the wildlife including cormorants, pheasants and ravens, Brent geese, jays, robins, starlings, kingfishers, goldcrests, shags, eagles, magpies and swifts. And one poem, ‘Sometimes’, seems to sum up Totterdell’s philosophy throughout this book:

Sometimes you need to be beneath tall trees

by water, to follow the path from the road,

the faint trail from the path, to edge

past brambles, crushing the tiny leaves

of seedlings, trusting in their resilience.

Sometimes you need to be invisible, screened

by a green growth of unofficial balm,

to see an unpoeted kingfisher, the ash

unknowing of its written-up demise,

the beech as it was before the book, the word.

In this collection the path is not obscured, there aren’t too many thorny metaphors to fight your way through, and for me that’s all to the good; you can see the wood, and the words, and the trees. It would make a splendid gift for someone who loves exploring this country, or is a member of Camra, or is a wildlife enthusiast. Mapping covers a lot of ground.

‘Peace, love and understanding have left the building’ is our Poem of the Week ►

I bumped into Mark at the South magazine launch in Bournemouth last night. He is to be the profiled poet in their next issue, in spring 2019.

Great idea for a book. Some great lines too. Hope it does well.